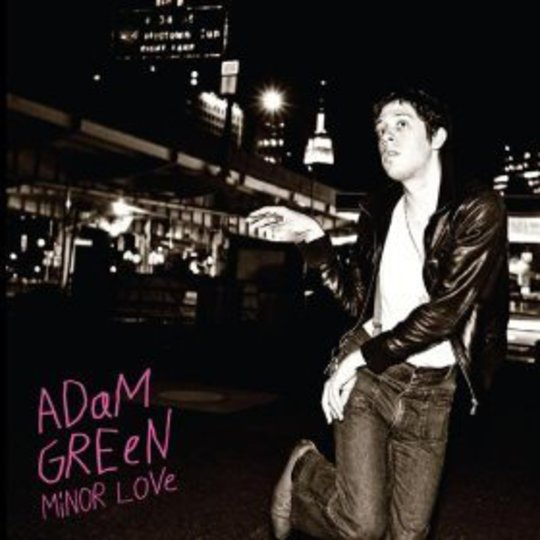 Juno is to blame for a lot of things. Quirky, non-realistically verbose teens, and Michael Cera becoming an on screen father amongst others. However, the soundtrack did bring Kimya Dawson to wider attention, allowing her to ride a career high with the rapidfire 'Loose Lips', and The Moldy Peaches finally got recognition for their naïve genius with 'Anyone Else But You'. Then lots of people bought their album and got confused. Lost boy Adam Green was forgotten, his bawdy easy listening thriving on the juxtaposition of smut and poo with smooth pop music.

Sad to say, the man's grown up from his earlier work. Sixes and Sevens suggested it, Minor Love confirms it. There's none of the potty humour of 'No Legs', or 'Who's Got The Crack?', or 'Jessica Simpson'. The only nods to the childish lyrics of yore is the chorus of 'Castles and Tassles' - “Castles and tassles / And flatulent assholes / I love you”. Toilet references and sex jokes are almost entirely excised.

Without the humour, this could so easily be lounge singer pop. This is, after all, the man who came up with the so bad it's genius of “I am a goat / In a moat / With a boat”. Without that, what is left? What do you do if you've excised all the silliness?

You go to Songwriters 101, and learn how to write proper songs, with addictive melodies and all that. 'Buddy Bradley' features the same vocal rhythm throughout, sung over the same guitar and bass riff – and yet, it works. The repetition is addictive, almost hypnotic. 'Boss Inside' tells a dark, depressing tale - “He wanted me to kill him / But I took his life instead” - over a plucked out acoustic guitar line. It's oh-so-mature, and it suits him. The lyrics are no longer puerile, focussing instead on bizarre narratives of slacker comic book characters, crying alone in diners, scumbags and schmucks.

His smooth baritone is in fine mettle throughout. You can see him in a velvet suit, clicking his fingers as he lulls out 'Give Them A Token', or on a stool, crooning out 'Bathing Birds'. A lesser voice wouldn't have carried these songs. Nothing on here is innovative, or new, or cutting edge. This is forgotten pop music, the music everyone got distracted from by musicians with beards, or fiddly guitar parts, or synths.

Green's New York heritage is channelled on 'What Makes Him Act So Bad', a song that could easily appear on a Velvet Underground record, its simple chugging guitar backing the vocal melodies perfectly. 'Don't Call Me Uncle' could be Love. The Sixties never died – they were just endlessly recreated.

Not everything on here works. The fuzzy guitar riff on 'Lockout' was annoying the first time everyone heard it. There are no indications here that that will ever change. Trumpets arrive on the chorus, too late to fix anything. The garage rock of 'Oh Shucks' doesn't fit in well with the timbre of smooth tranquillity elsewhere.

As is typical of an album that fits 14 tracks into 32 minutes, there are no epic orchestral movements, no post rock mountains and valleys, no dub workouts. Minor Love is a record of succinct pop ditties, with only three clocking in over 150 seconds long. It fits in well with the internet generation, their shortened attention spans questing forever for everything. It fits in well with the elder generation, used to these classical tropes of songwriting. Unlike Sixes And Sevens, Green's remembered to keep things interesting. He's a grown man at last.