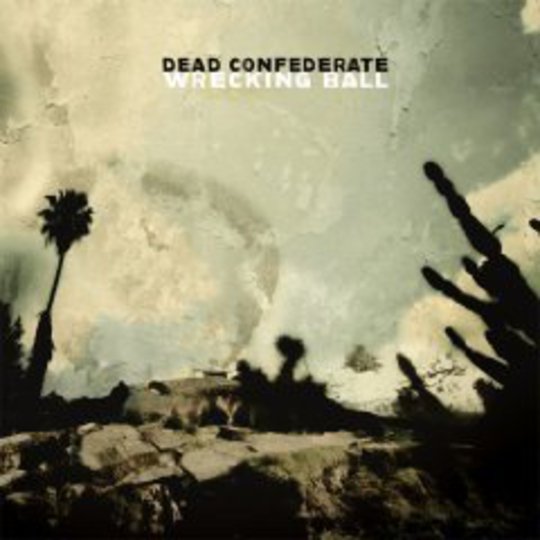 There isn’t much to dislike about Dead Confederate in principle. Their quiet-loud-quiet to-ing and fro-ing (insert Nirvana comparison here) is precise and stimulating. Hardy Morris’ whiskey-soaked howls are dizzyingly reckless. Their stormy slide guitars sear with self-abuse. So why is it that Wrecking Ball is ultimately a little empty, a little forgettable, a little pedestrian?

‘Start Me Laughing’ is something of an exception on this album. It is by far the band’s most furious effort, wracked and stacked with growling riffs and shattering cymbals. It sticks out as Dead Confederate’s only real moment of total unrestraint, bursting with agonising life, convulsing under the weight of its own perilously uncapped energy. At only three minutes, 20 seconds, it is also the shortest song on the record, and so remains concise, and avoids blundering into tedious excess.

This, it would appear, is important. Clearly, trying to numerically quantify music is a tactic which is dangerously detaching and obviously doomed to failure. That said, there is an odd, frustrating correlation between the length of each song on Wrecking Ball, and how good it is.

Not convinced? ‘Flesh Coloured Canvas’ clocks in at 12 minutes, eight seconds – though it feels like about 12 years. This track finds the alt-country quartet at their most country, and least alternative. The dark, brooding atmosphere is as present here as on the rest of the album, but Morris’ growl has softened to a whine. The texture is thin, but rather than using this extra room to explore and expand their ideas, the band find themselves stuck in the same dreary rhythm, which, like this sentence, goes on and on and on and on and on and on…

It all began with such promise. Opener ‘Heavy Petting’ has its chords torn apart, as drum fills give the signal to charge, and the song explodes with satisfying volume. ‘The Rat’ is better still: with much less of a rock‘n’roll groove, all pretence fades away. In its place are tearful mini-arpeggios (seemingly pinched from Jesse Lacey’s notebook), which are utterly haunting as they hang around like the stench of death.

One of Wrecking Ball’s best choruses comes in ‘Goner’ - its repetitiveness makes it hard to ignore. But despite this simplicity, it is played with such conviction, it's as though the band themselves are struggling to make sense of, or to come to terms with, whatever it is that has got them so wound up. ‘The News Underneath’, by contrast, spends a good seven minutes trying to find a chorus. And a hook. And some inspiration. Much like its aforementioned lengthier cousin, this is a song which becomes quickly tiresome – by the time it does actually kick in and go somewhere, the ferocity reeks of tokenism. It’s as though they could think of nothing else to do.

True enough, Dead Confederate are good at ballsy, sinister, twisted rock‘n’roll, and this they deliver by the bowlful. Unfortunately they show their weakness when they step beyond this brief. There isn’t enough in their county/grunge hybrid sound for them to pad out into anything a little more experimental, and it certainly isn’t the right vehicle for articulating more sombre emotional escapism. By the time Wrecking Ball reaches its end, it’s hard to believe that it lasted nearly an hour – there just aren’t 57 minutes worth of tricks up Dead Confederate’s sleeve.