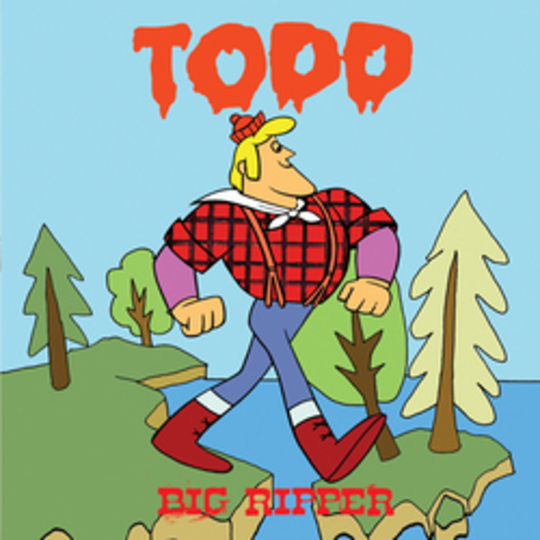 Now Todd, I don’t know what you’ve been up to for the last few years but we need to have a word.

When you record an album see, you conventionally pay for recording equipment. And mastering. And then if you’ve got any change you get some Listerine for that sore throat of yours.

But Big Ripper is taking the piss. When there are any discernible noises that may or may not be vocals, it sounds like the microphone is wedged somewhere down Craig’s lower respiratory tract and he’s in immense discomfort. When a guitar starts producing sound, it sounds like it’s being amplified by a blown amp leant against an adjoining wall three doors down. Hell, even when there isn’t any music to be heard, it sounds like your consciousness is being attacked by a swarm of mechanical wasps…

Sure, the lo-fi quality kind of captures the bands live… sound? And hot diggity goddamn, Todd are a band whose sole purpose in life could well be to give their audience simultaneous tinnitus and erections. But it really gets in the way of this album flowing together or ever feeling like more than a massed collection of demos and jams.

Or at least it certainly does for the first few listens.

Because lurking under all that noise, distortion and sheer fuckedupness are some things resembling ‘tunes’; it’ll possibly take several sets of earphones and indeed eardrums to locate them, but they are present. The warped ‘Black Gold’, with its howled screams, is impressively raucous and succinct, the Part Chimp-esque sludgy breakdowns of ‘The (R)Wub’ are wonderfully strewn out and the bass strings on ‘French and in France’ resonate and reverb to form a heroin user’s doom death march. And it’d be wrong to overlook the sheer normality of ‘Hard Life’, with its downright badass riffs and Seventies sounding vocals.

Big Ripper is a flawed record, but crucially it's one that doesn’t compromise. Indeed that unique inability to play it easy has always been what makes Todd so special; and I suspect the already initiated would be gutted if this record was an ‘easy listen’. But it’s so far beyond the aforementioned point on the scale that even your average Pissed Jeans or Hunches fan is going to think their hi-fi (or mind) has blown.

With every subsequent listen it gets that bit more ingrained into the old grey matter and patterns begin to spiral out of the fuzzy afterbirth forming an intriguing and dense fog of rich sound. It’s just a question of who is mentally up to the task of wading through it to find them.