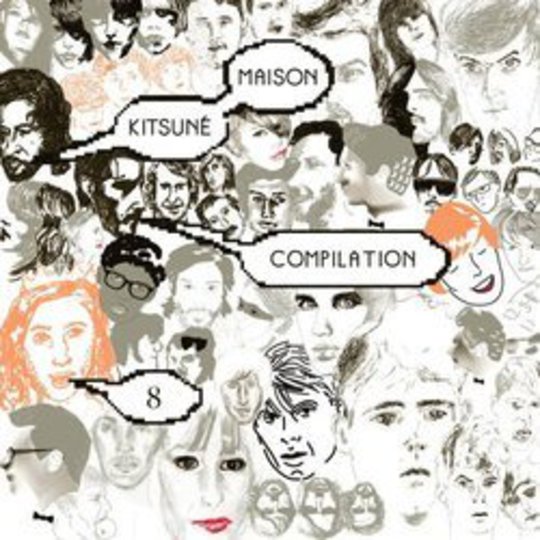 French label and fashion house Kitsuné has spent the best part of this decade curating its own compilations that have acted as a sort of ‘Now That’s What I Call Music’ for hipsters. Now onto its eighth collection the name is a brand and recognised for breaking the biggest names in electro-pop and providing a launch pad for those looking to cross over into the mainstream.

On the strength of this effort, however, Kitsuné might be losing their cultural cache quicker than the electro-blog-house they bore, bred and helped mutate. Forgoing their previous tactic of mixing the tunes for the listener, this array of tracks feels superfluous and tacky. The album certainly does have some pluses though, no doubt about it. From Memory Tapes' trippy sand dune inertia on ‘Bicycle’, through to Midnight Juggernaughts' charming refusal to let go of the techno threshold, Kitsuné shows it still knows how to string together the best sequence of party jams this side of Berlin. It also shows its keen eye for a future star too, with guest spots from label starlets Two Door Cinema Club and Delphic. The Molineux remix of Two Door’s ‘I Can Talk’ takes the peppy sugar rush of the original and turns it into a intercontinental strut with melodies interspersing hooks and a killer breakdown. Delphic meanwhile still sound a bit like Keane going on Stars In Their Eyes as New Order, but as long as they write songs as good as ‘This Momentary’ success won’t elude them for long. Finally the whistling Aryan poster boys of The Drums purse their lips and blow all over ‘Let’s Go Surfing’ which rides the wave between infuriating and undeniable perfectly.

That’s the good though; the bad is so much worse. It’s the sort of thing a Nathan Barley reference toting naysayer would hold up as an example as all that is wrong with warehouse parties and Hype Machine overkill. From Crystal Fighters to Heartsrevolution by way of Le Corps Mince De Francoise there is more filler in Volume 8 than an ageing Hollywood star. There is something so cheap and disposable to this music when it is done badly that by three quarters of the way through this hour long record you actually start to become a bit depressed. Much of the reason 2009 has been dominated by acts such as La Roux and the rise of Urban Pop like N-Dubz is that indie guitar bands overspent themselves and pushed people to breaking point. In much the same way Kaiser Chiefs and Razorlight acted as a back breaking straw for commercial indie, this lack-lustre Kitsuné outing reflects the decline in a musical style that has dominated the underground for years. From Klaxons to Simian Mobile Disco so many have benefited from the rise of Kitsune that a fall was inevitable and collections like this show why the appetite for dub and bass acts like Joy Orbison and Gold Panda has risen to mouth watering levels recently.

If this is the best Kitsuné have then they may well need to go back to the drawing board and start over. If it isn’t then why didn’t we get to hear it instead of being left with this rag-tag bunch of club kid hangers on?