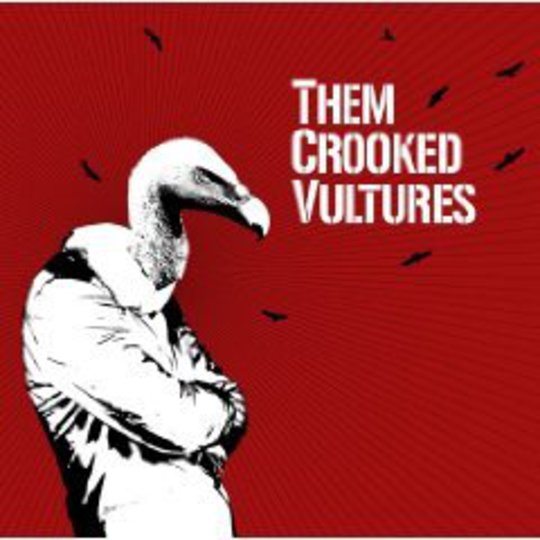 One of the delightful things about rock supergroups is that no amount of empirical evidence will ever QUITE persuade us that the next one to come across the horizon isn’t going to be unutterably brilliant. Them Crooked Vultures are a band that consist of the bassist from Led Zeppelin, the drummer from Nirvana, and the man who to all intents and purposes is Queens of the Stone Age. It in no way follows that their music will therefore sound like a perfect, synergised combination of the three acts. And nobody really believes they will... but it’s not really about belief, more hope. What with Homme indisputably being A Talent, it being okay to like Led Zep again, acceptable to rate Dave Grohl so long as he’s drumming, and the general surfeit of rock lore sloshing about in general, why not allow oneself a little daydream about the contents of Them Crooked Vultures?

I suppose the main reason is that one day you’ll actually have to listen to it, whereupon you’ll have to decide between a cold hard look in the eyes at a faintly pointless record, or else allowing your mind to gather up the evidence of genius on display and call it something special. If you take the latter approach to Them Crooked Vultures, you will in all likelihood be paying extra careful attention to the drumming, any riffs that lean toward the classic side, and will probably end up nodding sagely about how ‘tight’ it all is.

I tried doing that the first time around, but my mind experienced a little drift halfway through, and I kind of forgot what exactly it was I was listening to. “Oh,” thought I, ”this appears to Queens of the Stone Age. Not sure which album. Definitely not one of the best ones”. It was a gut impression, but I’m having a bitch of a time shaking it off. John Paul Jones has done some cool things post-Zeppelin, but writing lots of brilliant songs hasn’t been foremost amongst them. Dave Grohl writes crap AOR for a living, and retains his impeccable drummer credentials only through not actually drumming in Foo Fighters. And then we have Josh Homme. Josh Homme sings and writes lyrics for Them Crooked Vultures. He is also the sole guitarist in what is, essentially, a guitar band. He’s a man well used to accommodating famous collaborators, both within the mercurial QOTSA line up (one Dave Grohl having put in a solid turn on Songs for the Deaf) and also with his collaboration-centric Desert Sessions Sure, you can find Grohl and Jones’ influences within the music (a little shy of halfway through opener ‘No-One Loves Me & Neither Do I’ a riff strikes up that sounds so like the Zep that you can imagine this sole bit of music to have virtually been the point of the project for its two younger members), but it’s unlikely that you’d pin the record on either of them without forewarning. Whereas you wouldn’t be gobsmacked to discover anything on Them Crooked Vultures was a QOTSA song; certainly at its strangest moments (the lullaby/Lullabies-ish ‘Reptile’, the wheezing, dissonant fairground folk of ‘Interlude With Ludes’) it’s virtually inconceivable that it was the work of anyone but Homme.

So a de facto QOTSA album with Grohl and Jones as players and collaborators: good, right? Um, occasionally. There are some almighty grooves here, ones that filter Homme’s penchant for the evil and off kilter through a once in a life time, classic-in-the-best-sense-of-the-word rhythm section. The prolonged, ghostly coda of ‘Warsaw or the First Breath You Take After You Give Up’; the tightly-coiled but oddly woozy ‘New Fang’; the gristly four to the floor squelch of ‘Gunman’; all very impressive moments, ones that it’s fair to say are better existing than not existing, lest people turn to Wolfmother in their hour of desperation. But for all the nice fragments, the songs are rarely satisfying within themselves. Considering Grohl and Homme’s pop nous, there isn’t really a decent chorus to be found, with many songs feeling like a leaden exercise in making it through to the last minutes, either for a groove-tastic wig out or for Homme to do something weird (or both, in the case of the tedious for five minutes, brilliant for two ‘Elephants’). You suspect they were all having such a good time that self-editing wasn’t really that high on the agenda; though there aren’t any comedy drum solos (which might have been rather fun), the three players sit at the top of the mix almost constantly, busily clattering away for nigh on the album’s entirely hour-plus duration. It becomes rather jarring, and leaves little space for Homme’s voice to assert its feminine strangeness.

Presumably one of the reasons people remain optimistic about supergroups is that while we’re aware they tend not to be great, it’s rare that they leave enough of an impression for anyone to really be particularly scarred by the memory. Them Crooked Vultures does not remotely represent the best work of anybody involved. I'm guessing this partly because for all Homme’s undoubted influence he clearly couldn't play dictator, partly because nobody felt any obligation to compete with their dayjobs or legacies, partly because the pop song writers couldn’t be arsed to write any pop songs. It’s an oddball groove-rock album, played very well, imprinted with Homme's undeniably interesting personality. Yet when all’s said and done, it's not particularly memorable and entirely lacks the type of yee-haw exuberance that might have made it a sloppy treat. Fanboys and girls of all three musicians will find a little something to enjoy here; few if any of them will still be listening when the next ‘dream’ line up comes our way.