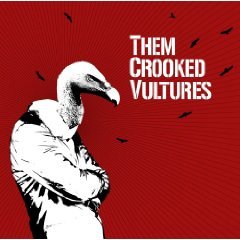 So a de facto QOTSA album with Grohl and Jones as players and collaborators: good, right? Um, occasionally. »

rock's newest supergroup release their self-produced and self-titled album, a week and three months after the band of queens of the stone age's josh homme, foo fighters' dave grohl and led zeppelin's john paul jones first appeared onstage together. the buzz around this band has built steadily since the summer and they have produced an album that far surpasses all the expectation.
description from www.roughtrade.com