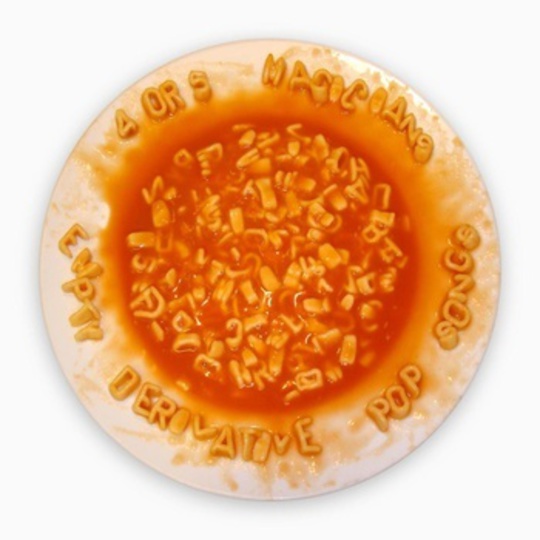 No-fi may be a 'thing'. If it wasn't a 'thing' in the beginning, it has almost definitely become a 'thing'. That is to say, a genre which was almost devised – proponents making a concerted effort to 'make' that sound and has come to prominence in the recent months and years. Now, it's neither a good 'thing' or a bad 'thing' but a 'thing' it is. The difference, for the most part, between lo-fi and no-fi – if you'll forgive me for wading dangerously into a bog of semantics – is that between necessity and choice. Brighton's bright'n'bouncy guitar-pop quartet 4 or 5 Magicians fall into the category of the former with their debut LP, Empty Derivative Pop Songs. It's cupboard rock.

The lyrics are the stand out, defining feature, and I say that as someone without much respect or attention-span for what anyone might be saying at any particular time, in a song or not. Write about what you know, they say. Tick. From the slacking, self-explanatory, stage-eyed opener of 'I'm In The Band' to 'Change The Record', an ode to frustration at the ever saturated-with-shit airwaves (“I've had enough I'm totally bored / Change the record I can't take any more/I've resorted to listening to Radio 4”), it's there. It's not so much what they're saying but how they say it, and here it's through 11 tracks of varying but always guitar-led, raucous enthusiasm. With the anthemic 'Forever On The Edge' (“Always scraping by/Tesco Value 'til I die”) which sees the bass almost sing and 'Nice Little Earner' (“Economic disregard/put it on your credit card”) it makes sure they fit neatly into the hole they've created for themselves, with each and every rough diamond.

There's also another thick ol' tick, this time for frontman Dan Ormsby's chirpy vocalisms, which take varying forms throughout. It's not a gargantuan problem with bands from this island, but the tendency to creep more than half-way across the Atlantic in terms of accent is more common than it is irritating. Just because some bloke from Sheffield sings like they're from Portland doesn't make them a Bad Person. Given the frequent nods to the Nineties American alt. rock of the likes of Sebadoh and Pavement, this makes the way Ormsby goes about his business critical. Sometimes it's little more than a rap ('Forever On The Edge') yet it sometimes reaches into strained reaches from the depths of the oesophagus ('Orderly Queue'), but it all helps to forge the quartet's identity.

The production and playing are both of the red-raw, messy kind, but get the basics right and it matters little, nail them and it's not even the slightest consideration. It may seem like eating chocolate cake wrapped in sandpaper, but it's worth it; rock is an often unsteady path for audiophiles. Empty Derivative Pop Songs has verses which bubble and choruses which bang, again and again, deeper and deeper. 4 or 5 Magicians are among good company – there's more than a palmful of bands of this ilk mixing melody and pleasant noise to term it something extant, if not yet significant. 4 or 5 Magicians' debut may not be quite joining the fine records released this year by Let's Wrestle, Sky Larkin, and Johnny Foreigner, but they're not quite so far away.