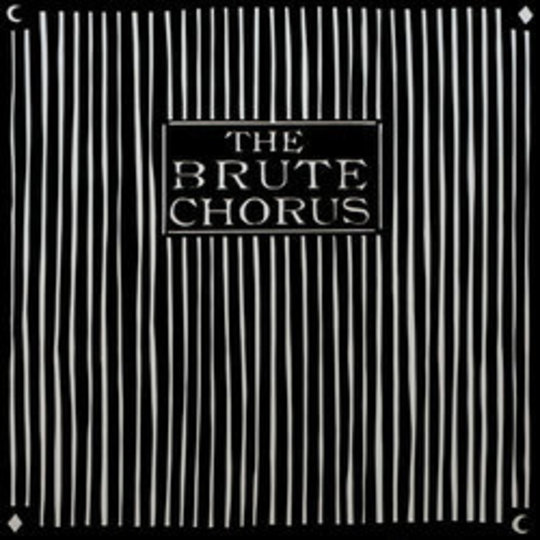 Live albums: usually the product of contractual obligation or a stop-gap filler allowing labels to milk more money from stadium filling cash cows (U2, Muse). They typically exist as a compilation of carelessly thrown performances or the auditory document of some supposedly momentous gig. They come in various forms, but the point is (notable exceptions like Stop Making Sense and Minimum-Maximum aside) they are rarely good. Which makes it all the braver for The Brute Chorus to make their debut album a live record. Although this original approach doesn't necessary improve the songs, it certainly hasn't hindered an assured debut.

First off it has to be said that listening to The Brute Chorus doesn't really feel like listening to a live album. It was recorded in one take in front of 300 fans at the Roundhouse in Camden and the fact that their appreciation can be heard between songs is the biggest clue as to how the album was recorded. The other big clue is when frontman James Steel brings proceedings to a halt during 'The Ransom', apologises profusely ("I will abuse myself later") and picks up from the start again. Credit must go to the tightness of the band themselves and also the sympathetic post-production by Victor Van Vugt for the impressive manner in which the dynamics aren't lost in the potentially perilous live atmosphere. These qualities are particularly evident on 'She Was Always Cool' as it moves seamlessly from pounding toms and handclaps to genteel acoustic and then on to fuzz-bass rockabilly. Mercifully The Brute Chorus' decision to record live doesn't seem to be an attempt to prove their blues-rock authenticity through ludditism.

Although at face value The Brute Chorus appear indebted to the punk-blues of The White Stripes and The John Spencer Blues Explosion, they also frequently display an irresistible pop sensibility. At times their stop-start rhythms, momentum building snare marches, pounding basslines and up-front guitar hooks make them resemble a more wilfully esoteric and rustic sounding Franz Ferdinand. Indeed on 'Nebuchadnezzar' James Steel compliments his sleazy moustache with a severely arched eyebrow as he declares "If I come rising back up/I'm gonna bring it like a young King Tut/ I'll paint myself with gold and give her everything that I got", with the kind of sexual menace Alex Kapranos breathed all over the Franz's Tonight.

It's not quite the deep growl of your archetypal bluesman, yet over the course of the album the charismatic Steel's voice proves itself an agile and engaging instrument in itself. On the scuzziest garage-blues numbers like the off-kilter opener 'Hercules' and the fuzz-bass heavy 'Send Me A Message' his voice wavers exasperatedly like an English Jack White. Album centrepieces, and highlights, 'Blind Ulysses' and 'Love's Chains' recall Jeff Buckley at his most restrained, both musically in their gentle hums and guitar reverberations, and vocally in Steel's plummy phrasing. 'Love's Chains' in particular is outstandingly beautiful, providing one of the few moments where the album really captures your heart. Unfortunately it is followed by the ham-fisted rockabilly duet 'The Cuckoo & the Stolen Heart'; the vocals of guest Tigs (of Chew Lips) oscillate irritatingly in a horribly affected faux-American accent.

Lyrically there is a Greek mythology thread running through the album along with references to other historical figures such as Joan of Arc. A lot of these references tend to fly right past the listener and at times they seems a little too clever for their own good. It takes repeated listens for some of the more memorable lines to stick, such as "I could count the days you were married in the notches on my wooden leg" from 'She Was Always Go'.

The album's biggest weakness is that while The Brute Chorus excel in producing off-kilter blues and folk-tinged pop rock with unique lyrical eccentricities, musically they feel a little too much like an assimilation of pretty old influences. One can't help but wonder whether with some more studio time they would have been able developed their sound in manner which would allow them to express their idiosyncrasies more clearly. That said, other great eccentrics from this isle have created great albums despite using familiar sounds and influences (see: British Sea Power). So even if isn't groundbreaking, The Brute Chorus is nonetheless a bravely conceived and well executed album, and one that reveals its charms further with each listen.