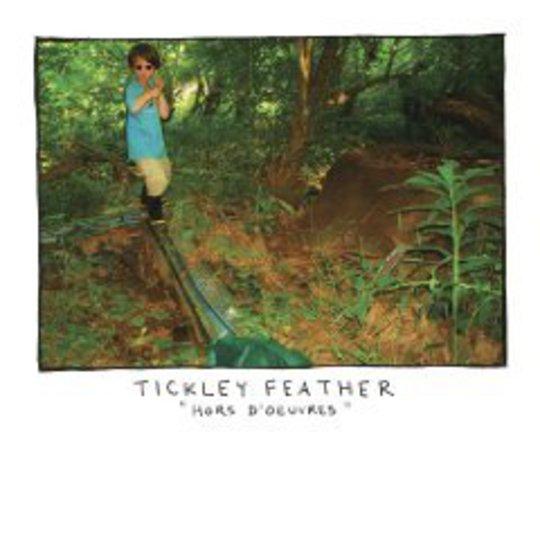 Sometimes music can be a seasonal thing, in that certain artists will be most enjoyable at a particular time of year. The National, for example, are tailor-made for those gloomy rain-soaked nights in November. And I find myself far more inclined to reach for an Ash record during those all too fleeting days of summer we get in this country. With that in mind, it seems quite fitting that in the run-up to Halloween we get a record as eerie and unsettling as Hors d’Oeuvres, the follow-up to last year’s eponymous debut by Tickley Feather (aka Annie Sachs).

When you learn that Tickley Feather is signed to Animal Collective’s Paw Tracks imprint, it should come as no surprise that she specialises in hazy, lo-fi bedroom pop. However, she is able to avoid falling into four-track cliché hell by dint of the genuinely idiosyncratic charm her sound carries.

She takes simple components, and builds something that is more than the mere sum of its parts. Most of the songs hang around a bouncy drumbeat, a simple melody and Sachs’s ghost-child vocal delivery, which is usually submerged deep under a sea of distortion. There are moments on the record, in fact, like ‘Sure Relaxing’ where the haze is so heavy that it’s hard to tell whether we are hearing Sachs’ voice or some other alien instrument.

The murky sound established on Hors d'Oeuvres creates a heady and occasionally oppressive atmosphere, which is at odds with the playful delivery of the words and melodies. The juxtaposition between the haunting and the naive is one of the key things that make the record such a likeable and engaging listen.

That said, at times it can be difficult to escape the nagging feeling that the record relies a bit too heavily on its sense of wooziness. You can’t help but find yourself wishing that Sachs’ strangely enticing voice wasn’t always so deeply obscured, as you suspect it could tug on the heartstrings a lot more than we experience here. Arguably the only instance of any kind of emotional impact is the simplistic and delicate ‘Roses of Romance’.

The most successful moments on Hors d’Oeuvres are the ones where Tickley really lets herself go. The record hinges on its slightly sleazy, groove-driven centre-piece ‘Trashy Boys’ and the brilliant bedroom disco of ‘Club Rhythm 96 and Cell Phone’. As well as this, closing track ‘Tickley Plays Guitar’ is a pulsating pysch guitar instrumental which is a world away from the rest of the album, and lends a splash of variation. These highlights are undoubtedly the enduring things you take away from the album, rather than the occasional frustrating lapse into auto-pilot.