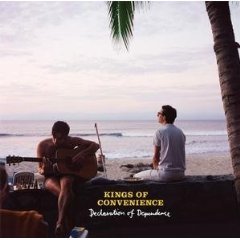 Kings of Convenience - Declaration of Dependence

Three albums in, and after almost ten years the band’s creative flow seems to have pooled – and with the limited nature of acoustic music the song itself is often not enough. »

norwegian duo kings of convenience are back after four years with their third studio album, 'declaration of dependence'. the album is a wonderful record for a lot of reasons. for one, eirik be is equally comfortable talking about the record's 'serious ideas' and laughing about its' 'hi-brow bossa nova' moments while his partner erlend oye is clearly thrilled by making, 'the most rhythmical pop record ever that features no percussion or drums.' for another, there is no one who makes records like they do. 'when we started out we were afraid of sounding like other artists,' erlend says. 'but now we feel pretty much alone.' but the most striking thing about this album is how powerfully it reminds you that making music together is not a game, it's not something to be undertaken lightly, this record is part of a much larger picture, a long and involved relationship that has had its good and bad times. 'declaration of dependence' is the story of two people living two very different lives sensing that they are immensely more powerful together than apart. in that sense it is the most adult, the most mature record kings of convenience have ever made. that it is their most gripping, their most revealing is, if anything, just a by-product of that honesty and their endeavour.
description from www.roughtrade.com