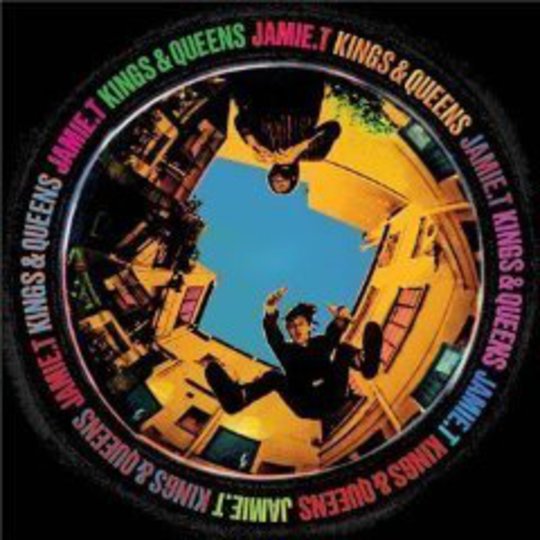 I think one thing that we can all agree on is that Jamie T doesn't take things too seriously. That's not to say that he doesn't work hard, put out quality songs and albums or tour them accordingly. I'm just saying, Jamie T likes to have some fun. His brilliance (yep, I said it) on his first album, 2007's Kev Kharas-adored Panic Prevention seemed almost accidental. It was hidden behind youthful bravado, wicked grins, and the pervasive (and effective) use of none more wonky keyboards. Having released a strong, Mercury Prize-approved debut with enough hooks to gut a fish, Jamie T waited almost two years before releasing new material. Yeah, I'm not counting 'Fire Fire', which almost nobody seemed to notice.

But the mid-section of 2009 saw the floodgates open, with Jamie T and the Pacemakers releasing two EPs to precede the release of Kings and Queens, featuring six strong songs that didn't make it onto the record. So the expectations for this album were really high, although I wouldn't exactly call it hype. Mr T was adamant that he was going to let the songs develop on their own and take the course that they presented, rather than rush them in an effort to capitalize on first album success the way so many of his landfill peers did to their detriment. Giving these songs the space to develop, and with the assistance of his best friend/producer/band member Ben Bones, Jamie T and the Pacemakers have made a masterful album, capitalizing on everything he initiated with Panic Prevention.

'368' begins with possibly the most grating voice imaginable, repeating "He's three hundred / three hundred and sixty eight", though the song does have a lot of charm - for starters, it's about the amount of beer needed to reach inebriation. Remember what I said about Jamie T not taking things too seriously? 'Hocus Pocus' is one of the most rhythmically driven tracks on the album, and even though Jamie sounds not unlike the new Alex Turner, he still manages to showcase a knack for flow and enunciation that the Monkey in chief has arguable abandoned. There's nothing about 'Sticks 'N' Stones' that isn't anthemic or summery, but don't hold it against the song. The keyboard hook is stunning, but it rears its head sparingly (unlike some on Panic Prevention) and lets the lyrics about rebellious youth (no, we're not tired of that yet) speak for themselves. "Pat on my back and a swing on my brew / You're still my friend, it's impossible to hate you / Cradle to the grave, I know we always misbehave" could well be Jamie T's mission statement.

'The Man's Machine' is an incredibly deceptive song, commencing with a minute long into/sample; but once the beat comes in and the keyboard and guitar wash over you, you're practically at Jamie's mercy as he spits away. It's a curveball start, but the chorus is as big as any he's ever written. It's one of the best on the album. 'Emily's Heart' is Jamie flexing his range muscle. It's him alone on the acoustic with only a little help on a couple of lines, as stripped down as he gets, but as cohesive a song as any he's written.

'Chaka Demus’ has seen a couple of incarnations before it wound up here. There was a leaked single version, the EP version, and the Ben Bones/Jamie T mix, but they really did some quality self editing from the leaked song to get to this. It's still catchy as fuck and keeps the jubilant guitar line, but it took the hammy quality of that first version, and still kept the focus on the lyrics, including probably the album's best line: "Two world wars and one world cup / Used to have an empire then we grew up / Lost everything who gives a fuck". Sometimes the simplicity of Jamie's lyrics are what makes them as cutting as they can be.

'Spider's Web' is perhaps the album highpoint. I say that even though in the first 35 seconds Jamie says, "Making in-jokes about Americana" and "Obama sounds like Osama to me". Over sunny finger picking, you can practically see the wry smile on his face as he says things that'd get him punched in the face under any other circumstance. It builds beautifully: with each passing verse another instrument or beat gets added to the mixing pot and they all go together brilliantly. It's an amalgamation of everything that is great about Jamie T: his ability to go acoustic and soft, his droll humor mixed over an infectious beat with a huge chorus; by the very end of it you can't imagine it's the same song that you started with. And that's really where his talent lies.

Kings and Queens is a resounding success. Okay, maybe it's a tried and true formula that Jamie T and Ben Bones have created, but their textured, layered songs each have something new to offer upon every listen, and they've mastered the art to near perfection. Jamie T and the Pacemakers have most certainly cemented their position as Merry Pranksters, injecting their youthful effervescence into a musical landscape that can take things far too seriously.