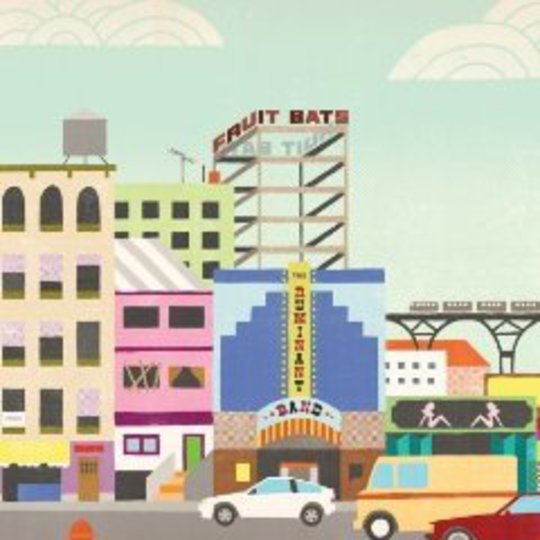 First things first: Fruit Bats sound deeply, deeply American. Bandleader Eric D. Johnson has played with the likes of Vetiver and The Shins over the years, so this shouldn’t come as any surprise. Indeed, there’s something of those bands’ easygoing strum to be found on The Ruminant Band, their fourth LP.

From its triumphant beginnings - where ‘Primitive Man’ coasts along a hardy acoustic backbone and the title track charms unequivocally - geniality is the name of the game. When the latter song’s opening bars subside into a flurry of AM radio riffs and gradually swelling verses, the effect is delightful: you can almost smell the marijuana and barbecue haze. “You’ll always have smokes if you always give buckets of love” Johnson sings in its opening verse. Only a churl would disagree.

Much of The Ruminant Band would be perfectly at home on the Dazed And Confused soundtrack, so effectively does it capture the twin sense of wonder and naiveté Linklater relayed in his love letter to youth in the Seventies. The protagonist of acoustic track ‘Singing Joy To The World’ goes as far as to personify these qualities, as he happily races towards a series of beautifully rendered broken hearts: “He loved her at the bar when he saw her dancing / To ‘I Could Never Take The Place Of Your Man’… soon they were making out at three AM in the empty parking lot”.

‘Beautiful Morning Light’ is another highlight, Johnson pledging devotion against softly picked strings and ivories. The piano returns with some bounce in perfectly bucolic barroom shuffle ‘Hobo Girl’ (which does actually collapse into barroom chatter to finish) and the irresistible two-chord jollity of ‘Being On Our Own’. Really, there’s nary a weak moment to be found. The pleasures aren’t reduced by their simplicity, either. ‘Feather Bed’’s gliding backing vocals, the brushed waltz strokes of ‘Flamingo’ or intertwining lead guitar that heralds ‘Blessed Breeze’s arrival… all these things come together seamlessly, ensuring your return until indelibly etched into your consciousness.

Let it be said: this is not an album to overtly challenge or offer any radical musical shifts. But that’s okay. It’s the sound of a band coming into its own: psychedelia-tinged stomps rubbing shoulders with profoundly romantic tales spun of the warmest yarn. All set against an evocative backdrop of Michigan skylines, woozy piano and twinkling slide guitar, this is one made like they used to make ‘em – and it’s utterly gorgeous to boot.