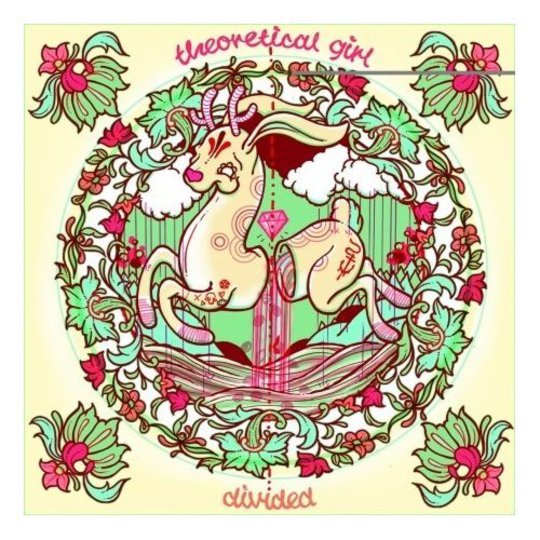 Not to be confused with New York no wavers Theoretical Girls (note: plural), you’d be forgiven for thinking Theoretical Girl, aka Amy Turnnidge of Southend on Sea, is something to do with this current surge we’re having in female-fronted indie and semi-indie offerings. In fact Ms Turnnidge has been working her lace-frilled socks off for well over three years to bring us this, her first album, debut single 'It’s All Too Much' having been released through Fake Product back in 2006.

And far from the (sometimes) brash and bombastic public attack of artists like Little Boots and Florence Welch, Theoretical Girl takes a more subtle tack, on all levels.

Divided is not a big album. It has 12 tracks, it has its moments of delicate drama and it has some obviously sound singles, but this all slides quietly and politely into the room as if it’s trying not to cause a scene. There’s no big bang. In fact, on first listen, it exudes such a sense of mild-mannered Britishness that Turnnidge’s prim vocals bring to mind some children’s programme of old, fronted by a terribly decent lady with perfect elocution.

In terms of hype, the same holds true even though the album hides some cracking tracks. Further listens reveal opener 'Rivals' to be an addictive little parasite which burrows into the brain and nestles firmly in the ‘recall’ part, resulting in a looping repetition of the chorus’ driving strings and harmonies. Washing up, making dinner, walking to work all induce unconscious re-emergence of the words “Do we have to be rivals?/Do we have to be rivals?...”

Similarly, 'Dancehall Deceit’s darker croonings are a delicious morsel amidst a platter of sickly sweet appetisers, more breathy and seductive to suit the murky adulteries of a dimly lit club - the song’s subject. The only crime here is its length, ploughing into the next dose of syrup after a mere two minutes, twenty.

When it comes to twee Theoretical Girl needs no instruction, to such a degree that several moments are unpalatably sweet. 'A Future Apart' is perhaps the worst offender, and low point of the album, with lovelorn lyrics and the employment of medieval-folkish recorders. “Let’s make another start/I can’t face a future apart” coaxes Turnnidge, as I imagine women in long dresses and plaited hair holding hands around a campfire. While I’m sure some might find pleasure here, a bitter and cynical old hippy-hater like myself is regrettably drawn into violence by such prissy songs.

Throughout, clarity seems to be core to the album’s production. On title track 'Divided' the caged echo of enclosed violins and hissing swish of cymbals played in close quarters summons a sense of dropping in to a live session rather than popping on a smoothed out final cut. Yet I still hope Theoretical Girl has a lot more to show for herself when performing live on stage. Parading a perfect red pout and deep swathes of false black lashes with winged liner, the reverberations and somewhat easy-to-pick-up choruses may well grab you in a way that this often pristine, dettoxed interior doesn’t.

While the elegant simplicity of songs like 'Good Timing' showcase Turnnidge’s silvery voice, there seems to be a tendency to over-egg things by repeating the same short lines in a rather basic structure on some of the songs. Coupled with the more upbeat pop tunes it works but in other places this too can chafe a little. Progressive it is not.

Gladly, despite a disappointing lull towards the end of the album, final track, 'The Hypocrite', drags you back out of your hole onto the theoretical dance floor, with an authoritative kick to the rump. Menacing violins and crunchy guitars combine with piano and vocals, to form what is probably my stand out song. Pulsating and jerky, it restores your faith and reminds you that there are other gems buried on the album.

What remains is to see whether Theoretical Girl simply thrives in the studio or can deliver such sparkling performances in practise.