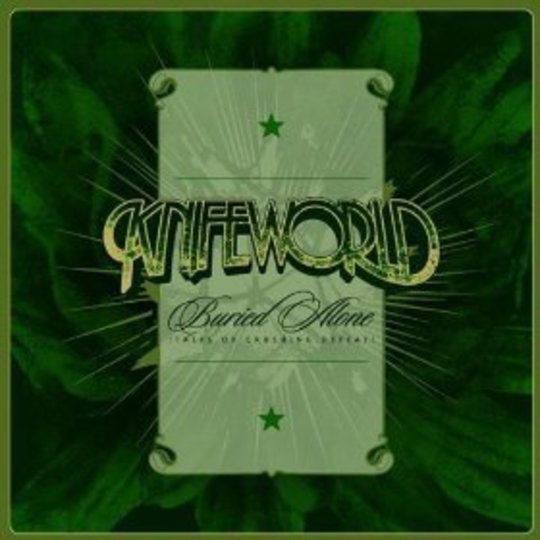 I still maintain that in isolation Knifeworld is a preposterous name for a band, but the dizzying theatricality of debut album Buried Alone: Tales of Crushing Defeat casts their choice in more sympathetic lighting. Hairpin twists of direction are the first tool Buried Alone… uses to kick your brain into submission. Heavy, huge, fucking guitars bludgeon you one second, before vocal harmonies take you by the hand and lead you towards somewhere else entirely, all the while ratcheting up the drama.

Track two 'The Wretched Fathoms' is a crashing assault on the senses. Guitars burst through silence, buzz-buzz buzzbuzzbuzzing, synths wail somewhere in the hinterland. Relief comes suddenly, with vocals floating along like they have no dealings with gravity, yet the break is short lived. Then you realise that those vocals which soothed you had some vile agenda along, actually just teeing you up for another volley of madness. This is how Buried Alone… snakes backwards and in knots around itself. The only thing that holds it all together is a steely conviction in its own strangeness and a scabrous pop sensibility that winds throughout. This album is coming from a place way, way through the looking glass.

'Corpses Feuding Underground' opens with a lo-fi surf guitar riff and Mad Hatter horns, at first coming in waves, peaking and then breaking down, then spreading its wings and introducing palm-muted guitars and insistent drums. It almost feels as if the track suddenly gets intoxicated with a sense of its own potential and decides that it would be foolish not to run riot. All of this takes place within two-minutes and 52 seconds.

The various members of Knifeworld have previously played with acts including Chromehoof and Max Tundra, and this lineage with semi-illustrious weirdos helps to put the aural maelstrom of Buried Alone... in some kind of context. The same fearlessness that drives MT and Chromehoof to pursue an idea to the point of ridicule also runs through Knifeowrld. That absence of fear is the strongest quality that Knifeworld possess: at times, the ghosts of the excesses of the first wave of prog loom large on BA, but the breakneck pace and chutzpah of the record leave its audience with no breath left to form any dissenting voices. This is also the rub. The tempo of BA frequently feels like there are sonic gems given only a cursory examination before being thrown away in favour the next idea. Track nine, 'The Money Shot', is this all over. There is a genius harmonised vocal bridge towards the end of the track - “you’ll get that I’m afraid there’s been an accident” - but despite sounding like one of the best moments off a Rival Schools record, it’s given less than 10 seconds of life.

BA occasionally offers the listener a head-down focus, (the single 'Pissed Up On Brake Fluid' could have garnered considerable MTV2 airtime in the post-ATD-I search for new hardcore-emo saviours) but its sheer precocious scale makes it something of an acquired taste. Anyone who remembers the band Dark Star but wished they could have reproduced more of the intensity of high-water mark 'I Am The Sun' will find a lot to enjoy here.