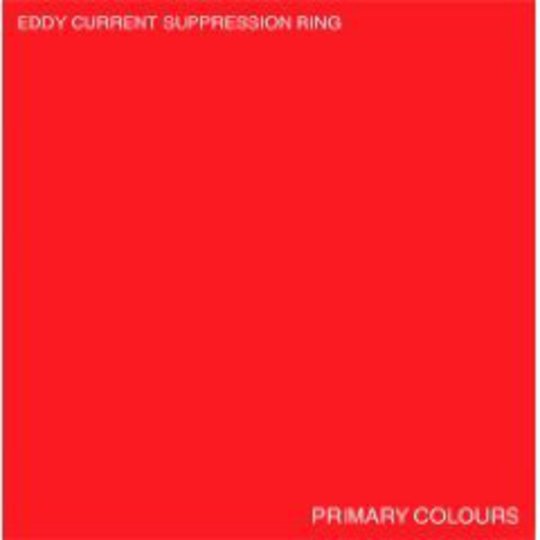 The unlikely but highly commendable decision to give a UK release to the two albums by Eddy Current Suppression Ring means that the Australian four-piece are - and will probably remain - the only band to release music on both the generally sedate Mancunian indie/electronic label Melodic and the eponymous imprint run by American grindcore band Iron Lung. For now, ECSR are that sort of band – their niche is that they don’t have one. Representatives of the worldwide garage-rock underground to some, back in Australia they won the Mercury-esque Australian Music Prize for 2008’s Primary Colours, which had already debuted at number six on its release. If Melodic have spotted commercial potential here, well, they might have a point. Might.

The spine of this CD lists its contents as Primary Colours +, and the more recent album is denoted CD1, but nuts to that. Does it not make total sense to begin at the beginning (or close enough) and see for yourself how ECSR have tweaked and teased their sound, taken on criticism and (mainly) praise, grown in stature in certain areas and maintained monomania elsewhere? Yes, it does. Eddy Current Suppression Ring first, then. Released in 2006 on Oz punk’n’roll label Dropkick, it’s entirely worth your time: a garagey take on the strain of early punk that sprung more from art school rock than metal or Chuck Berry. Recorded on an eight-track tape machine in four hours at a rehearsal studio, this isn’t presented as the ‘extra instrument’ that has been talked about with regard to Times New Viking, yet lends an apposite layer of zesty raunch to these clipped, midpaced struts.

Its outlook tends to fall somewhere between blank sarcasm and boyish fixations on indistinct females, which is hardly a new slant on anything, but delivered with charm. ‘Cool Ice Cream’ ("I ate all my veggies / And I ate all my soup / Now can I have / Just one scoop”) and ‘Precious Rose’ ("I found a rose on the ground / I picked her up / And gave her strength / For this rose / I’d go to any length") lie somewhere between hopeless romanticism and moderately creepy anthropomorphism, which is probably what the (uncredited) lyricist was gunning for. ‘It’s All Square’ sounds almost exactly like ‘Lust For Life’ for its first 15 seconds and slowly unravels into something that nails that ‘intellectual primitive’ end of ’77 punk – studiously repetitious, uprooted from rock’n’roll formula and, thinking of Wire and The Buzzcocks here, suggesting that they’ll get round to doing something of grander musical import, once they get better at playing their instruments.

Like ECSR, Primary Colours is brief, but not frustratingly so – just under 38 minutes against the debut, just over 36. The production is essentially the same in raw materials, but executed better still, feedback cut back and the rhythm section (Rob Solid and Danny Current) taking the presented opportunity to shine. ‘Sunday’s Coming’ is all whiplash guitars, bursts of drum battery that sound like when someone tells a joke at a variety show, and so-nonchalant-they’re-muffled vocals. ‘Colour Television’ is five minutes of unhurried, snaky buildups that drop noisy cloudbursts on you at just the right moment, and suggest that the Pixies and Future Of The Left are closer allies than the American nu-garageoids who’ve mushroomed in the distros post-Jay Reatard. Another five-minute job, ‘I Admit My Faults’, borders on motorik, its never-changing moods married to a glumly confessional lyric in a package that bisects Television and the Voidoids like a moth chewing through the fabric of the critical punk canon.

They could very easily be record collection rock, or even worse music journalist rock, could Eddy Current Suppression Ring. The reason they aren’t is that they put about as much of themselves into their records as it’s possible to insert into relatively standard contemporary rock music. (I’m also compelled to note that enough water has evidently flowed under the bridge for Primary Colours to not get compared to The Strokes in every other review; this would have happened in 2002, make no mistake.) Never threatening to be facsimile or parody, or suggest that they were written with any notion of gold at the end of the rainbow, may they grow in stature and mutate in all manner of peculiar ways.