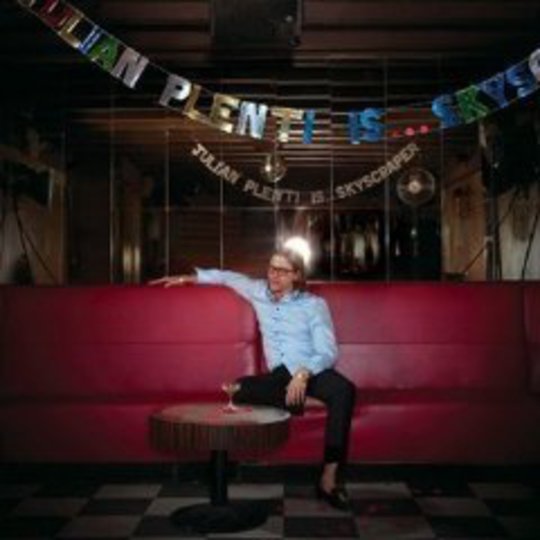 Even if the voice of Interpol’s Paul Banks weren’t the most easily recognisable in indiedom, not much effort has gone into disguising the identity of Julian Plenti. A moustache, glasses, a white shirt and a cover-story Agent Banks can tell without blinking because it’s basically true (that Julian Plenti started gigging in 1996, and then retired in 2001, just before Turn on the Bright Lights exploded). After the mild disappointment of Our Love to Admire (2007), ...Is Skyscraper's opener ‘Only If You Run’ lets you hope for a return-to-form on this solo record… or perhaps even a cure for the frustration of making music by committee. Without ever exploding, the song lures you in with a twinkling guitar part and purring keyboard bass; as promised, this is the romantic, intimate side of Paul Banks.

Nonetheless, a whole treatise on What’s Wrong With Interpol could be written with ‘Fun That We Have’ as the prime example… and unfortunately, that’s only track two. Before you assume this review’s written by a hater, bear in mind I’m talking about the multitude of flaws that manage to co-exist (somehow) with What’s Right With Interpol, not least: being a kick-ass live-band. Let’s be honest, Interpol feel like a pretty special act because they (very cannily) refuse to release – or even play – the bare minimum number of songs that they’re confident about. On any given song, you’re guaranteed a great riff or two… or a great hook… maybe a line imbued with a powerful mystique (“I had seven faces / never knew which one to wear…” etc.). Unfortunately, you rarely get all of these in one song, and when each of the elements are good, that doesn’t mean they fit. As ever, Julian Plenti AKA Paul Banks assumes that open-ended narratives and ambiguous symbols are preferable to boldly sung clichés, just as a change of (musical) direction keeps you (the listener) guessing, and keeps you giving them the benefit of the doubt that it’s all intentional.

Is it unfair to talk about Interpol so much? Well, no – not if JP’s not doing something substantially different. Half the time, this is a less rocking Interpol (magnifying the ill-fittingness of each song’s constituent parts), and the other half, it’s a collection of experiments with instrumentation (an oboe here, horns and synth-choir there…) to flesh out a pleasant enough arpeggio on acoustic guitar – most successfully in ‘On The Esplanade’. Overall, if this were released under Interpol’s name, it’d be their Amnesiac; the record that the band have to repeat and repeat isn’t a collection of cast-offs. Inevitably, you get borderline gibberish like: “shake me / shake me / sky-scraper… / shake me / shake me / sky-scraper…” ('Skyscraper'), but Banks somehow keeps it on the right side of the border, most of the time. “With all the fun that we have / with all the fun that we have / with the te-le-kin-e-sis” is definitely over the border – an excuse for a pentasyllabic word, right before the music lurches somewhere unexpected).

Just as Interpol always seemed like a good imitation of a great rock band (no-one in particular, just A Great Rock Band, with all its slogans and hooks, and gestures and shapes), Julian Plenti does a fairly good imitation of a solo-artist showing his sensitive side. Where there were flashes of The Smiths on the first Interpol album, here there are flashes of Morrissey’s Your Arsenal or Vauxhall & I, right down to the sampled voices on several tracks, and the strings mixed to be mysterious, and a shade sinister. The horns aside, there are several ideas worth taking back to Interpol, but the operative phrase here is ‘back to Interpol’.