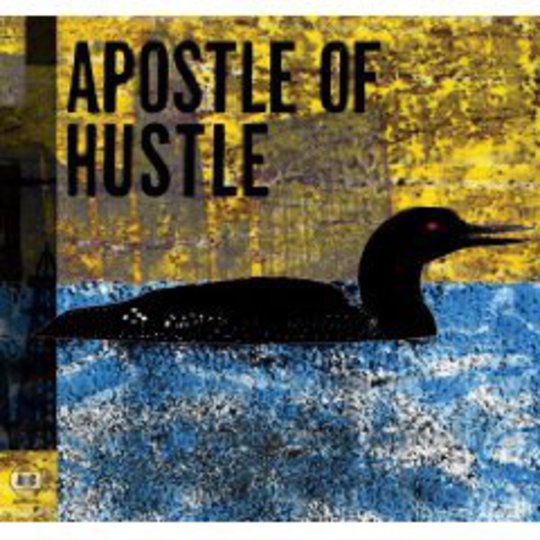 The best thing about side projects is that they give artists the opportunity to expose and dissect whatever it is they musically yearn for; the stuff that enthuses and electrifies them. Apostle of Hustle is a long standing example, formed in 2001 by Andrew Whiteman of Broken Social Scene after a particularly good holiday in Havana. Stirred by the disparity between life there and his Toronto base, Whiteman picked up a Cuban guitar and embraced South American folk, knitting a metaphorical poncho from the fine-wool blend of his own indie, latin and rock laced musical background. Yet, somewhere along the way it seems AoH have become a bit homesick and started edging their way back to more familiar territory.

Quite literally crashing into your ears with the squealing of tyres and crunching of metal, Eats Darkness gently assaults you with a hostile spoken opener. Regaling an “incredible fact about snakes” this brief monologue is fighting talk to set the scene, and the tone of madam’s voice makes me twitchy – I don’t much like confrontations.
In fact, throughout the album, these televisual soundscape shorts - rough and threatening against the flowing turns of mildly Cuban rhythms - make for a curious format. Layered abstractions create chapters in the album, defining its overall flavour with a hefty peppering of samples, speeches and sound effects. Without them, Eats Darkness stands as an effortlessly mainstream offering, its subtle songs nudging toward the subject matter of war and, more generally, conflict. But the blatant use of machine guns, military boots, and the familiarly whistled Colonel Bogey March flanking the main tracks, leaves even the densest among us in no doubt that this is a concept album.

Despite totting up to just over half an hour of music, Eats Darkness still manages to present its own musical miscellany. The warm South American tinges of 'Eazy Speaks' and 'Soul Unwind'; trip-hop steepings of 'Perfect Fit'; the lighter pop of 'Xerses’; and the distant hint of drum and bass beats in 'Whistle In The Fog'; they all meld together to form an pleasantly original, if somewhat schizophrenic, take on 'indie rock and roll'. In a saturated field of generic groups trudging the same path, it’s an often elusive accomplishment to successfully combine cultures without becoming a parody of those you emulate.

Granted, this third album steps furthest from the Cuban and Brazilian sounds that originally inspired the group, but surely that’s inevitable as time passes? After all, we’re eight years on and this is the trio’s third album. The constant throughout this period will have been the ongoing milieu of their full-time outfits.

Speaking of the album’s subject matter, Whiteman says “Each track is like tapas at the banquet of conflict”. For me, this equally sums up the album experience as a whole; while a watered-down Latino essence bleeds between songs, each is its own separate entity, existing independently of the others. There are certainly some succulent dishes on the album ('Xerses' and 'Eats Darkness' for me) but all together I do wonder if someone ordered a bit too much?