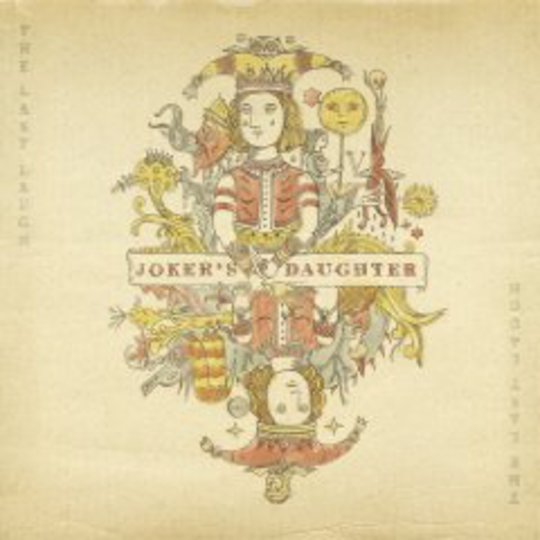 On their second album Gnarls Barkley labelled themselves The Odd Couple. Odd in the sense that they are two quite odd people, but not an 'odd couple' in the classic sense. They would be a real odd couple, however, if we replaced Cee-Lo with a female folk singer of Greek-Cypriot origin, trained in classical violin, with a penchant for Arthurian legend and songs about old ladies with giant shoes. And this odder couple is what we call Joker’s Daughter: a long-distance collaboration between London-born Helena Costas and Dangermouse that has its roots back in 2003, before Gnarls Barkley, The Grey Album and Gorillaz' Demon Days.

An intriguing prospect then, and for the most part a success. The key factor to this is that the album does not feel like a genre mash-up experiment or one that makes a point of its creators' disparate musical backgrounds. Dangermouse displays a similar degree of subtlety as on his contributions to Sparklehorse’s 2006 album Dreamt For Light Years In the Belly of a Mountain, although here his contribution is more substantial, being of one of two main collaborators. Nonetheless, it is Costas' songwriting talent which carries the music.

Well rehearsed in the British pysch-folk of The Incredible String Band, The Watersons, Fairport Convention et al, her soothing voice lacks the storytelling presence of the likes of Sandy Denny, but has an enchantingly quaint charm which places her closer to Vashti Bunyan For a perfect example, see album opener and single ‘Worms Head’: Costas' delicate vocals coo over a jaunty folk-pop melody given a twist of drama by swelling orchestral strings, while Dangermouse’s contribution consists of little more than a squealing synth line which adds just the right amount of tension to the second verse and subsequent choruses without sounding at all out of place amongst the acoustic instrumentation.

The Brit-folk influence is most apparent in the melody and feel of the acoustic guitar on ‘JD Folk Blues’, which Dangermouse compliments beautifully with some watery organ that threatens to consume the earthy instrumentation, but never does, instead giving way to a lush xylophone counter melody. Costas' compositional skill is evidenced on album highlight ‘Lucid’. An urgently strummed mandolin (or perhaps it’s a bouzouki) rides a gently modulating synth-bass pulse, while wailing backing vocals and searing violins take it in turns to supplement the melodrama, the best part being when the tension dissipates suddenly leaving Costas’ voice sounding weightless and vulnerable.

On other tracks Dangermouse gets to flex his production muscles a little more noticeably. The title song is a sinister stomp-along, all ghostly choir "ahs", eerie string arrangements, mischievous guitar lines and macabre synth squelches, but with momentary relief provided by a sudden blissful turn by the orchestra. ‘Jessie The Goat’, which is sung in a foreign language (no idea which) is adorned with synthetic ambient touches which evoke the chilled-out sounds of Zero 7. Penultimate track ‘The Bull Bites Back’ is one of the few moments where the synthetic beats are employed in a bolder manner, but their marriage with giddy guitar and flutes makes for joyous electro-folk-pop and is what Charm Of The Highway Strip by The Magnetic Fields would sound like if it traded in its country influences for some British folk revival ones.

Unfortunately the second half of the album is marred somewhat by a few experimental missteps. ‘The Running Goblin’ is just horrible, starting off with a western saloon-style piano before going all ominous strings and whistling, it sounds like it should soundtrack a Chuckle Brothers horror film. Another instrumental track which fails to captivate is ‘Chasing Ticking Crocodile’, where Dangermouse’s zapping synths and the irritating piano melody far outstay their welcome. It’s a fortunate side-effect of the general quality of Costas and Dangermouse’s musical collaboration that your attention isn’t often drawn to Costas’ lyrics, being as they are for the most part fantastical folk clichés (“the jousting knight throws his sword away”) or else just plain cloying as on ‘Under the Influence of Jaffa Cakes’. Whilst Joker’s Daughter is really two main protagonists, arranger Daniele Luppi deserves a great deal of credit for the way the strings add drama and mystique to the music, but without at any point becoming overbearing. Indeed, so ever-present are the strings that he almost deserves equal billing with Dangermouse as a collaborator.

Ultimately this odd couple have made for a very merry musical marriage, artists from seemingly disparate musical backgrounds proving themselves capable of collaborating on music that is worth listening to in its own right, as opposed to merely being a interesting genre-crossing exercise.