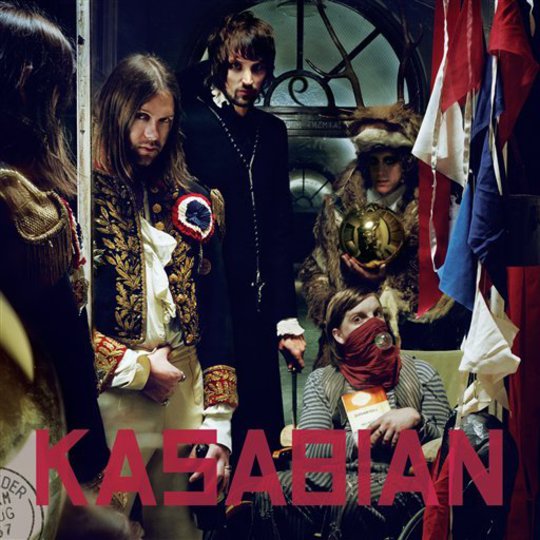 As a year of re-evaluation and ultimately re-invention, 2009 has left perennial ladrockers Kasabian in something of a quandary. Do they pursue the tired old direction that, whilst shifting several thousand units in the process and assuring them a lifetime of endorsements courtesy of the Gallagher brothers, is hardly enough to see them remembered in the future as anything more than astute copyists of better artists of yore? Or, as The Horrors have proved already this year, can they flip the coin of expectation completely on its head and come up with something totally unexpected and unlike anything else in their sadly predictable back catalogue? Well, I guess you could call West Ryder Pauper Lunatic Asylum a bit of both really because, while at no point does it manage to re-invent the wheel - despite the spurious claims of its creators - it does possess the odd moment of inventiveness that occasionally steers it away from the derivative chasm most post-Britpop influenced acts seem to become ensconced in all too often.

For starters, it's perhaps worth mentioning that the majority of the songs on this record are almost two years old, which would suggest a slight air of trepidation on behalf of both the band and their record label towards releasing West Ryder... against such a changing musical tide. Secondly, the decision to invite producer extraordinaire Dan The Automator - himself an expert of turning the most pedestrian of sounds into eclectic, beat-driven masterpieces of sort - into overseeing production duties here was undoubtedly a brave and potentially rewarding one, although in some instances one does wonder what kind of sow's ear he was given to work with in the first place.

Although the album's oldest - and arguably best - track, 'Fast Fuse', was initially released as a limited-edition fanclub single nearly two years ago, the first widespread public airing of anything attaining to be connected with West Ryder Pauper Lunatic Asylum did not bode well. The song in question, 'Vlad The Impaler', sounded like nothing more than a Black Grape b-side, Tom Meighan's vocal even more pseudo-Mancunian pastiche than ever, and if anything a million miles away from the band's insistence that this, their third album, heralded a marked departure from all things 'lad rock'. Quite simply, if their first, self-titled long player was their Screamadelica and follow-up Empire was their Second Coming, this threatened to be their Be Here Now; an album so shrouded in its own self-belief and bravado you could imagine it coming wrapped in its own throwaway plastic bag, traces of a certain white powder still evident in despatches. Surely the progression they'd been harping on about for so long wasn't just another false dawn? Or, maybe, for a band so steeped in all things Britpop to reach 1997 after starting off so boldly in 1991 two albums beforehand is considered to be something of an achievement? Whatever, it would be fair to say that expectation levels for the rest of West Ryder Pauper Lunatic Asylum weren't particularly high, so it came as something as a surprise that parts of this record actually justify the hype.

Take the already mentioned 'Fast Fuse'. Despite dating back to 2007, it suggests that maybe the tale of 'musical differences' between songwriter Chris Karloff (who left during the recording of Empire) and the rest of the band were accurate after all, as this sounds like a collision between the Rolling Stones post-Altamont and early T-Rex, Meighan's revelation "I'm like Lucifer's child" sounding incendiary and believable, his parting shot of "Heaven may call but I won't be there" menacing and brutal. Over the course of its four minutes, Kasabian really do sound a million miles from the Stella-swilling, Hackett-wearing yobs they tend to attract. Likewise psychedelia-tinged ballad 'Ladies And Gentlemen, Roll The Dice', which once again nestles itself in amongst the big players of the late Sixties, the Stones once again prevalent alongside less-feted proteges such as the Chocolate Watch Band and the Pretty Things, suggesting Kasabian's record collection - or guitarist and songwriter Serge Pizzorno's at least - stretches way beyond the golden era of Madchester after all.

There are other moments too, albeit briefly, where Kasabian make a claim to ridding themselves of THAT tag once and for all. 'Secret Alphabets' has a mournful, somewhat dissipated tone about it, sometimes meandering, others quite mesmeric in its delivery, while current single 'Fire' is like being smothered in marmite and being made to decide on the spot; an ambitious two-songs-in-one dose of musical schizophrenia or dull-as-dishwater trad-rock plodder with clever samples and a nice bassline? Your call I guess, but I'm sticking with the latter option.

Unfortunately, West Ryder Pauper Lunatic Asylum suffers in the most part for being so predictable. You can almost imagine the look on Dan The Automator's face when Sony presented him with the demos to the likes of 'Underdog' and 'Where Did All The Love Go?', the former spitting out "Kill me if you dare" over the same old insipid Oasis riffs while the latter's pretense at being late-period Beatles loses every ounce of kudos by the end of its opening couplet, Meighan asking "Ever took a punch in the rib cage, sonny?" to the obvious delight of numerous boneheads up and down the land, if not Mr Automator. Musically, it tries its damnedest to be a 21st Century update on the fab four's 'All You Need Is Love' and the Stones' '2000 Light Years From Home', but ultimately huffs and puffs its way towards being a stable mate to Noel and Liam's 'All Around The World'. The album's two mid-point strummers, 'Thick As Thieves' and 'West Ryder/Silver Bullet', also sound half thought-out and severely lightweight, the former aping The Kinks 'Sunny Afternoon' badly while the latter, despite featuring actress and one-time Outkast collaborator Rosario Dawson on backing vocals, is nothing more than aural wallpaper, as in debt to Ocean Colour Scene's back catalogue as The Small Faces, and as brutally inept.

Bizarrely, had West Ryder Pauper Lunatic Asylum been Kasabian's first excursion into album territory it may have been more acceptable as an entire piece of work. However, having witnessed the band's growth through turgid, heard-it-all-before monstrosities such as 'Empire' and 'Shoot The Runner', not to mention their unforgiveable posturing, one suspects the end product here may have had more to do with the record's producer than its creators, and as a result, this album is as unconvincing as the band's hollow assurances that they're open to embracing new horizons.