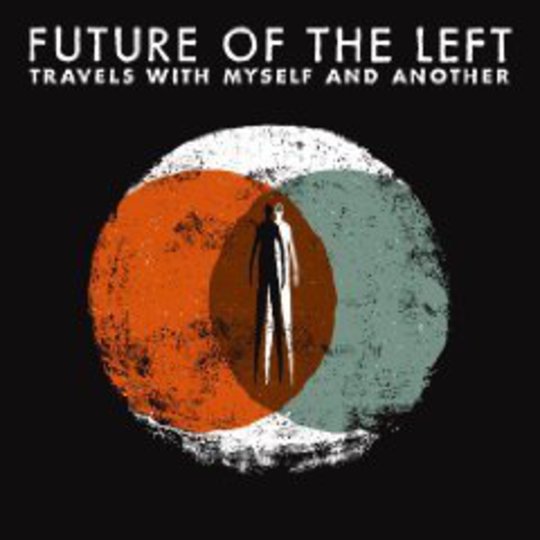 It’s all about control for Andy Falkous. Rage is the driving force behind his music, and as leader of Future Of The Left and mclusky, his voice has spewed bilious words over torrents of fierce lo-fi rock for over a decade. In both of these bands, Falco’s fury has been contained by psychopathically tight instrumentation, masked by caustic wit, and tempered by a tongue planted so deeply in his cheek it’s practically boring through to the other side.

Smartass stage banter and carefully bitter blogs are intrinsic parts of FOTL’s appeal for the converted, but they’ve often seemed to distance the band from a bigger audience by making themselves easy to not take seriously. On Travels With Myself And Another FOTL have abandoned the last vestiges of daftness, and announced themselves as a band to wholeheartedly cherish. This record obliterates the footnote ‘post-mclusky’.

With songs pitched somewhere between the dark metallic hateryhthms of Shellac and the self-effacing post modernism of Les Savy Fav, Travels... demands career-best performances from bassist Kelson Matthias and drummer Jack Egglestone. They deliver like a good referee and linesman, never getting in the way of the flow. Rarely flash, always purposeful, reliably loud, they drive this album without diverting attention from the magic of its supercharged songs. ‘Arming Eritrea’ is a case in point. It explodes the album from the fuse of a misleadingly gentle guitar doodle, with Falco bellowing "Come on, Rick / I’m not a prize!" over the fearsomely crunchy guitar tone which dominates Travels..., ushering in monumental shifts in tone when unleashed. The rage returns for ‘That Damned Fly’, de-humanising music industry pricks until they’re sickening insects, but sounding joyful in the process. It’s not a million miles away from the template designed on debut album Curses, but the step up in quality is monumental.

New for this record are the shockingly gorgeous harmonies that seep into surreal story song ‘Throwing Bricks At Trains’ and the inevitably-not-quite-as-good-as-its-title ‘Stand By Your Manatee’. This is a poppy album in parts, although anyone coming to the savage ‘Land Of My Formers’ expecting a sudden Xenomania chorus will be, errrrr, disappointed (clue: it’s bloody unpleasant). FOTL’s pop rulebook is all screwed up, in any case. Lead single ‘The Hope That House Built’ is one of the only moments of respite on the album, and ‘Yin / Post-Yin’ wraps an instantly memorable riff around a disorientating drum pattern, like a giant fuck you to anyone wanting easy answers.

This doesn’t stop Travels... from being obscenely catchy. We’re hardly in Crazy Frog earworm territory on ‘Land Of My Formers’ (opens like Goat-era Jesus Lizard and accelerates towards a possessed yelled conclusion) but Falco’s screams and Kelson’s riffs ingrain themselves into your brain with speed and precision. ‘Lapsed Catholics’ ends the album devastatingly, starting as an acoustic spoken word piece completely at odds with everything else here, before bursting into the most anthemic thing FOTL have produced to date. Falco sounds nude by the end, screeching "Give me something I can take away!", the closest he’s come to emotional transparency on record. It's the same earnestness you see when he's belting out his songs live. Without fail, once the song is over, he'll revert to the joker.

That could be because Andy Falkous feels a desire to entertain his audience, but to me, his reliance on wittiness is a coping strategy for the perverse under-appreciation of his music. In a perfect world FOTL would be massive. Instead they’re on a never-ending tour of small venues, and probably very bored with visiting places like Leicester and Preston. In our imperfect world, they’d at least be solvent. As it is, they’re just about getting by without other jobs.

Travels... is a 33 minute monster without a slither of excess fat, and the best thing Andy Falkous has ever put his name to. It leaked several weeks ago. Wouldn’t you be angry?. Every generation has its share of great struggling artists, but it’s staggering to think that a band as brilliant as Future Of The Left are still teetering between rock and part time work.

It’s not their fault, the way indie is monetised is all wrong. Lucrative half-hearted reunions trundle nations for no reason. Huge marketing budgets are spunked on hype bands barely remembered three years later (hi, Tapes ‘N Tapes). In essence, there are no real financial rewards for the toil of FOTL-sized bands. They are endlessly playing gigs to the same crowds as ever, reliably blowing them away. Falco will stay angry, his music will get better, and nothing will change. They deserve more, and this album deserves to be bought.