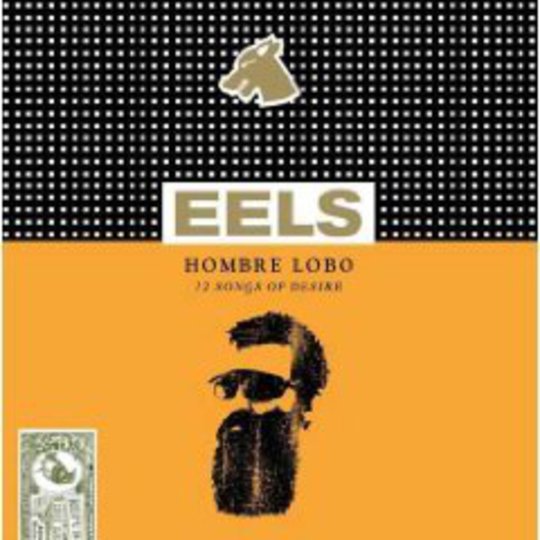 Where does Eels' appeal lie? Is it in their verbal-contortion-inducing omission of a 'the' from their name, making a discussion about the band a clumsy affair in which the speaker is constantly aware of an impending grammatical stumble? Is it the curious manner in which a plural noun winds up being synonymous with just one person? Is it musical versatility and lyrical excellence?

We may be tempted to jump on the last point with a starving affirmative, but the declaration that Hombre Lobo has a stereotypical Eely sound is likely to yield knowing nods of the head.

As he periodically does, E's sporting an impressive beard these days. It's an attempt to get into character, of course, and it's not the Unibomber this time. Nope, it's a werewolf - that being what 'hombre lobo' is Spanish for, presumably a grown-up version of old persona the Dog Faced Boy - and he's hungry for love. Intimidating facial hair is probably the least you'd expect. This emotional rollercoaster of an album has a few cleverly disguised clichés similar to 'emotional rollercoaster' embedded in the music and lyrics. So where 'Lilac Breeze' nods to ‘Jailhouse Rock’ (the remix featuring E-lvis), ‘Tremendous Dynamite’ is a Doors-y Sixties time-warp. And is the agony of love unrequited sufficient to excuse the inclusion of the lines "I was made for you and you were made for me" in the slightly reggae-ish 'Beginner's Luck'? Perhaps. Okay, then what about "you're so fine, if you were mine, I'd love you up"? Hmm.

Fortunately, we have ‘The Longing’ - a heartbreaking hymn to the object of our Hombre Lobo's affection, attention and infatuation wherein every line drips with forlorn anguish and the entirely believable vows that emerge when one reaches the highest state of devotion to another. He wants to see her tears, her sorrow, her faults, and her doubts because he loves them all. And you believe him. You believe him when he says he loves her and knows more about her than "that guy" to whom she gives "that look" and you believe him when he states that "there is not one single thing that matters more than just to see her."

Before your heart melts and forms a gloopy puddle on the floor, be warned that this is still a man (er, slash wolf) we are talking about. How long do you expect sensitivity and sentimentality to last? Get real and listen to 'Fresh Blood' which is the auditory illustration of a werewolf's unsatiated sex-drive. So maddening is this pent up libidinal energy that the protagonist appears to forget which mythological being constitutes his identity. One too many episodes of Buffy, methinks, or maybe an overdose of Swedish vampire movies. 'Tremendous Dynamite' is similarly charged with a chorus that spontaneously combusts on the final word - "she's DYNAMIIIITE!" – kaboom.

In terms of music, meaning and pretty much everything else, ‘All The Beautiful Things’ is ‘PS You Rock My World's twin sibling. The album sensibly decides to end with a cynically melancholy 'Ordinary Man' which is what our hero claims to NOT be and he thinks of his muse as "someone who could appreciate the fact." Come now, who would really refer to themselves as 'ordinary'? That combined with the disdainful generalisations about a city's populace aren't likely to do you any favours, though, granted you're not particularly flattering yourself either. Compare "They all just play the parts of who they are" with "I'd rather be alone and try to be someone that I'm not." Neither prospect seems particularly appealing and the listeners' sympathy ought to lie with E's Esmerelda, who appears to be trapped in a land of loners.