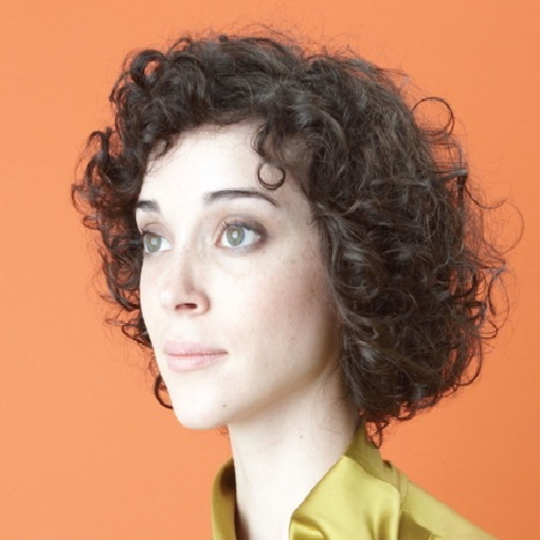 If the portrait on the cover of Annie Clark's first album as St. Vincent, 2007's Marry Me, made lovelorn denizens of the indieverse, female and male alike, forget about Joanna Newsom for a bit and moon over the striking Oklahoman instead, the music behind the face was even more beguiling. Lyrically astute and sonically unconventional, after listening to Marry Me its cover shot came to seem like subversion of a sort: this was a work of substance, not just another album by a mediocrity with a guitar and cheekbones.

Having said that, Actor's artwork repeats the trick, so maybe Clark just likes putting her face on things. Or maybe she's commenting on the illogic of equating a fortunate bone structure with a capability for song structure. Or maybe her shift from staring the viewer in the eye to looking askance reflects a more guarded approach to her songwriting. Or maybe...Who knows. The point is, in Clark's case you're encouraged to ponder the reasons for things because her work exudes such keen intelligence that everything, be it a lyric, an arrangement or an album cover, becomes potentially significant.

Certainly the air of paranoia that swirls through the opening trio of songs here has meaning, both in the context of the individual songs and for the theme of the album as a whole. "Paint the black hole blacker" is the despairing yet jaunty refrain of opener 'The Strangers', 'Save Me From What I Want' has Clark repeatedly pleading just that, while the queasily off-beat fairground waltz of 'The Neighbors' culminates in the discomfiting apprehension that "Tomorrow's some kind of stranger/Who I’m not supposed to see".

This distressed air continues throughout, and grows only more pronounced on the songs lying beyond the palette-cleansing single 'Actor Out of Work'. Even here, on the album's most straightforward number, identity and confidence are in crisis. Putatively a love song, lines like "You're a liar/And that's the truth/You're an extra/ Lost in the scene" leave this feeling like a snapshot of a relationship that's headed for the rocks. The music reflects this, too, with distorted bursts of treated guitar giving the otherwise breezy melody a demented cast.

The protagonists of these songs seem to be battling with maintaining some sort of outward show of calm while inside they're rapidly falling to pieces. The music reinforces this reading, with lush woodwind motifs, the dappled light of the economical guitar parts and the soft balm of Clark's voice often being overwhelmed by harsher elements. The concluding section of 'Black Rainbow' – one of several songs to make mention of neighbours, underlining the recurring sense of an observed outer self hiding a troubled interior – offers the most extreme example of this technique, its ascending strings and relentless beat imparting a sense of inescapable, unbearable panic.

For all the darkness of Actor's concerns, however, it remains an exceptionally pleasurable album to listen to. But that isn't to say that its songs, which cluster around the themes of dishonesty, unhappiness, hurt and doomed dreams of rekindling past loves, are ultimately unsuccessful in conveying what they're about. It's more the case that, like any truly engaging artwork, they satisfy even as they perturb. The clearest parallel with what Clark is up to here seems to be the conceptual self-portraits of Cindy Sherman, which see the photographer adopt role upon role that, while never really her, are explorations that nevertheless have their basis in authentic emotion.

"What'll I share, what'll I keep/From all these strangers who sleep where I sleep?" Clark asks herself on 'The Strangers'. Whatever the answer, and whatever games she's playing, 'Actor' is a gift that it would be foolish to overlook.