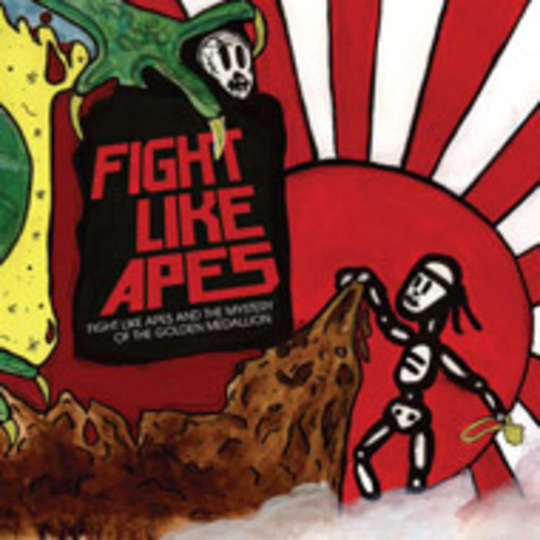 Their album title may sound like it belongs on the cover of a kids’ book, but Fight Like Apes clearly not only know their music, but also the place they’d like to occupy with it. FLAatMotGM (as it will be know in this review) is littered with references to bands and scenes in general, nowhere more so than on opener ‘Something Global,’ possibly the most consciously written song about cracking the business since the Wannadies’ 'Might Be Stars'. As singer MayKay demands “Give me my hook!” in between verses dissecting trendies, journalists and their garish friends, the band invoke the spirit of Carter, coming across like a garage punk band with synths instead of guitars.

They must have swapped some knowing looks when they scheduled ‘Jake Summers’ immediately after. It’s almost the dictionary definition of a hook-laden indie dancefloor hit, from the lone bass intro and dreamy first verse to the layered keyboards, all of which are soon shredded by the brattily shouted chorus. In fact MayKay’s persona suffuses the album, coming across by turns as clever, bitchy, funny and never more than a hair’s breadth from kicking your ass, something she threatens to do often (not least on ‘Lend Me Your Face’ – three guesses what she’s planning to do with it).

Which brings you to the dilemma of Fight Like Apes – you’re never sure quite how funny they’re trying to be. On the one hand there are songs which cock an eyebrow at the listener, almost sharing a joke – on ‘Battlestations,’ the repeated refrain “I don’t feel like playing this song again / The sample sounds like shit and I don’t wanna hear it again” appears right after…an extended sample. But then one of the album’s rare disappointments, ‘I’m Beginning To Think You Prefer Beverly Hills 90210 to me’ descends into a middle eight that wouldn’t be out of place on a Friday night sketch show.

You might think that only an idiot would worry about it, if not for the fact that when they take their tongue out of their cheek they write some thrilling music. ‘Digifucker’ weaves melodies that would happily soundtrack a fairytale in between its awesomely smutty choruses, while the aforementioned ‘Battlestations,’ like much here, gains momentum and ascends in drama in ways that must have come in handy warming up crowds for The Prodigy last year.

In fact, the album is almost carelessly littered with singles, many of which have already seen the light of day on various limited formats in the band’s native Ireland – there are enough here to keep lesser bands going for around three albums! Therefore, the one thing you’re left with as ‘Snore Bore Whore’ winds itself up is that these people clearly love music, and good times, and are excited by the prospect of soundtracking other people’s. It’d be churlish not to be grateful.