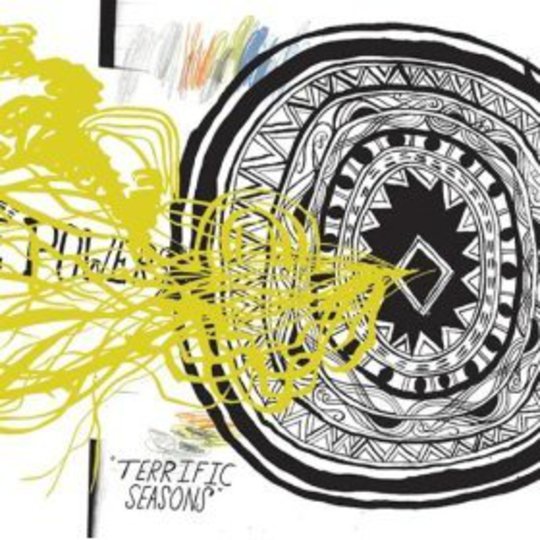 These Are Powers are the project of one-time Liar, Pat Noecker, sacked after that first kick-ass album where his guitar’s pretty much the signature sound, alongside Angus Andrews' barbaric yawp. With their new album out on Dead Oceans, in February, These Are Powers are forging a bold, daringly strange path, which makes it timely to check out their re-issues.

On their first record (Terrific Seasons), TAP don’t differ hugely from post-Noecker Liars, the guitars whirring like the flywheels of massive and terrifying machines, or a torture device for "breaking down witches". Hell, the first intelligible lyric ("UFO’s are dropping..") seems like an allusion to Liars dropping a sample of ESG’s ‘UFO’ in the middle of their debut. Underpinned by fat urgent throbs, and dashed with garbage-can percussion, many of the tracks are oddly danceable, and definitively New York: ‘Little Sisters of Beijing’ makes me think of ‘Intergalactic’ by the Beastie Boys, but the video and the robot, not just the groove.

‘Nubians on Franklin Avenue’ literally continues the exploration of NYC’s psychogeography: the same percussive machine-groans, cymbals like running down a fire-escape, and distant shrieks of guitar, like impossible vultures between the skyscrapers. Compared to Angus, Pat has a tough act to follow, but if he’s a beta-male, then he’s a beta-male in a tribe of scary Neanderthal throwbacks... and parsing those screams reveals he’s yelling "Hexagon! Black hexagon!"

On it goes, the tight industrial rhythms describing fume-stained towers – above and between which winged things swoop – whether it’s Anna Barie’s or Pat’s vocals & guitars describing the latter, and the drums or processed guitars describing the former. Personal favourite (if any circle of Hell can be “favoured”), ‘Pizza Master Ice Cream Parlour’ is so evocative of HR Giger’s New York series of paintings (he of the biomechanical landscapes for the Alien saga), the title seems like a twisted joke – this is ice-cream exuded from refrigerated bodies in grimey morgues, surely? It’s the penultimate track – at 19 minutes – and if at first it lacks the "dark night of the soul" narrative of ‘This dust makes mud’ (the 35 minute closer from Liars’ debut), then after a few listens it certainly rivals it.