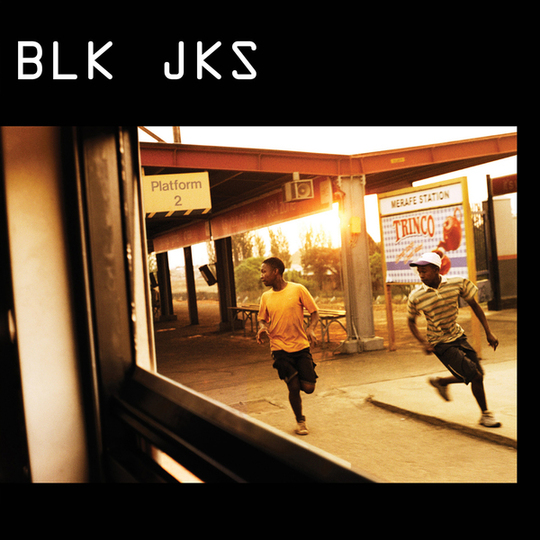 Unless I've grotesquely underestimated the average Western indie fan's knowledge of South Africa's alternative scene, it's kind of humbling/embarrassing to think that were it not for the moderately elaborate series of coincidences that brought BLK JKS to the attention of Secretly Canadian, the closest that most of us could come to naming a decent rock band from the country would be, I dunno, Seether. And Seether are just horrible.

Anyway, as lore would have it, BLK JKS were formed in Johannesburg in 2000, but had to wait some seven years for their Western break, when a chance meeting with an on-tour Diplo set all sorts of balls rolling. The net result was this, the Brandon Curtis-produced Mystery EP, which received a limited vinyl release last year, but come March recieves a proper roll out in remastered, resequenced and re-artworked form.

And for that you should be excited. The muggy swatches of layered, synthetic distortion, pounding afrobeat drums, generic promiscuity, and the low, sultry timbre of Linda Buthelezi's oft-multilayered voice most obviously call to mind TV On The Radio, but not the worthy or the awkward or the am-I-honestly-enjoying-this?-TVOTR. Nope, though it's pretty hard to shake the comparison; it's the fun of 'Dancing Choose' or 'Wolf Like Me' that comes to mind when contemplating EP lead track 'Lakeside', a deep swirl of processed moaning and frenetic percussion punctuated every so often with a joyous, chaotic eruption of whistles and chants, in turn collapsing in a searing shred of ebullient guitar.

Similar thrills abound from the near six-minute title track, which slowly hauls its way from a vaguely funked up soup of distortion, goes just a wee bit rubbish for 30 seconds as Buthelezi mutters some truisms about life being, y'know, mysterious, before unexpectedly picking up a breathtaking head of steam and haring off over the horizon, the singer leaving English behind as he screeches and moans through an improbable number of octaves, weaving through the glowing tangle of supercharged, Zep-ish guitar.

'Summertime's sultry menace follows next, Buthelezi finding his best lyric as he ominously contemplates "Summertime, burning cancer into my skin", the band reigning in their more effusive tendencies in favour of something treacly dark and threatening. Finally, 'It's In Everything You See' grounds their energies fully, drums ditched as lurching clouds of electronics and seasick guitars coldly drift and dance around Buthelezi's warm stab at a falsetto.

It's idea after idea after idea, and though TVOTR comparisons are as inevitable as they are fair, billing BLK JKS as the Brooklynite's more giddy cousins is perhaps a little off the mark: better to say both bands tap into the same ultra-distinct vein of murky sonic magic. It's taken them the best part of a decade to get to the point of releasing a single EP, but if there's any justice in the world, 2009 should be the year the floodgates burst right open.