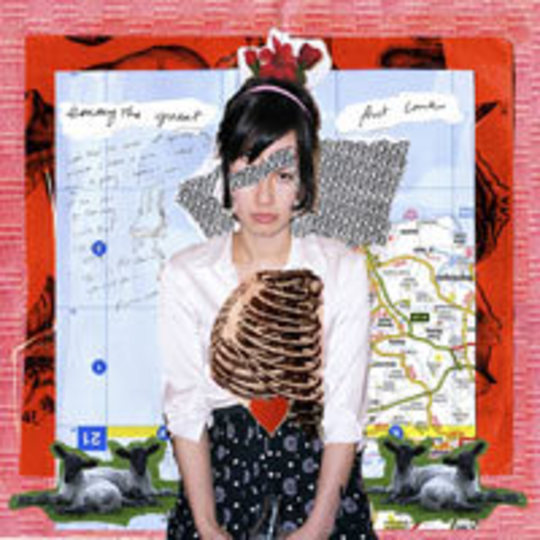 It's been a while since Next Big Thing Tips by the NME and DiS but Emmy the Great's debut is a triumph, with a maturity beyond her years, and with a humour no less enjoyable for being subtler.

It's a weird but significant historic coincidence that the day First Love arrives at the DiS office, two versions of Leonard Cohen’s 'Hallelujah' are going head to head for the 2008 Christmas # 1. The title track, at the centre (and heart) of Emmy's album, also happens to interpolate some of Cohen's lyrics and a modified melody. On the same day, The Times 2 runs a feature debating the definitive version but Emmy offers a re-write that's unique for actually stating what the song means to her; why you choose to play it – or sing it – when you do; and why, of all the lines you might choose to borrow, her pick is "it’s a sad and it's a broken hallelujah" before her more buoyantly folksy chorus "hallelujah! The skies were so much bluer!" (sung with double measure of irony, of course).

With or without the historic coincidence, it's still a good place to start this review, because the album’s (excellent) opening four songs owe as much to Leonard Cohen as they do to Stuart Murdoch, both of whose influences are buried in the DNA of songs that are much more Emmy’s own, these days. As ever, there are cute vignettes ("we discovered the magazines under your bed"), and nods to other songs (the affirmation of togetherness – "we arrrrrre!" – at the end of 'Bad things coming', lifted from a gorgeous Go-Betweens duet), but these familiar Emmy-isms are subordinated to the creation of an essentially realistic world; one that may not always be enriched by – but is certainly complicated by – very serious questions about Life, Love, Death, the Afterlife and religion.

Oh, and it’s AMAZING. Did I mention that?

Tellingly, the opening track ('Absentee'), interpolates 'Kyrie Eleision'; later, we get "Gloria in Excelsis' ('The Easter Parade'), and halfway through, Cohen's 'Hallelujah' ('First Love'). In fact, each of these is a musical and even ideological dialogue, rather than a mere borrowing. After setting the rustic scene for her take on 'Gloria', Emmy narrates her inner argument: "there’s no Arcadia, no Albion, no Jerusalem / and there's no pastures green beneath all of this / there's earth, and there's ash and there's blood". The sentiment's not nihilistic though, but more pagan, nay Wiccan, because every song, and almost every line, sings into being a world that's alive, and peopled, and brings a holy luminescence to the depiction of childhood, in spite of this particular song's affirmation of Patti Smith that religion offers hope, "but not for me".

With some songs, the painful emotions sneak up on you ('City Song' with its "ooh-oohs" after "your mouth tastes like decay"); others cast their shadow from the first bar: '24' is uncannily like The Cranberries devastating spectre of mortality, '21 today', but that's a good thing. With lines like "one hand is the parachute / the other is the hand that cuts the strings", it recalls 'Dress Rehearsal Rag' from Cohen's classic _Songs of Love and Hate (1971), without actually cribbing it. Obviously, Emmy's got more range, but it seems fair to say she's got Cohen's, Murdoch's, and (why not?) Will Oldham's dark comic timing. The line "you are sewing up my lips" would be lurid – or just plain false – without that timing, but instead it's pictured immediately, and rings true, just like the line "they pulled a human from my waist" at the very end of the album, to provide a different - emotionally dissociated? - perspective on "I tried to have a life / to keep my life in yours" (from the recent single 'We Almost Had A Baby').

Mid-album, the rainier Belle & Sebastian tracks set the tone, and by now Dylan and Cohen have had namechecks, as well as an allusion to Patti Smith. That said, check the chorus to 'MIA': "I always like this singer / I remember when you said her / name was Mia... or M-I-A" B&S would have been tedious if they really did just like Nick Drake & Morrissey... it’s the dashes of "The Fall & Manfred Mann" / "Pere Ubu & The Sugarcubes" influences that make them what they are, and the same is true of Emmy. The final triad of songs ease the listener out of the emotional turmoil, and if those too seem relatively lightweight, that's not to say they're not better than any Isobel Campbell track you care to name, solo or with B&S (with the latter's stock images from fables, and predictable rhymes). In fact, the rattling rhythms, and vaguely Celtic folk stylings, in places, bear comparison to the jauntier numbers by Bonnie 'Prince' Billy. The penultimate track is Emmy's longest to date, with a guitar-part that recalls early B&S (especially 'Slow Graffitti'), and Tony Doogan-like production (see also Mogwai's 'Small Children in the Background'), in that the room-sounds, Emmy’s directions, and the physical movements of the players, are captured on mic, and mixed high. Think also 'Springtime' by Jeffrey Lewis – they're both budget takes on The Beatles 'A Day in the Life'.

So anyhow, this is an undoubted Nine out of Ten album. If you want to know what a (comparable) Ten out of Ten debut might be, look to Patrick Wolf’s Lycanthropy (2002) for its production genius and deranged polyvocality, but this stands up alongside the confessional folk-rock of Dar Williams’ The Honesty Room (1993), or Belle & Sebastian’s Tigermilk (1995). Can you imagine what her second or third album will be like, when she’s the same age Leonard Cohen made his first record?