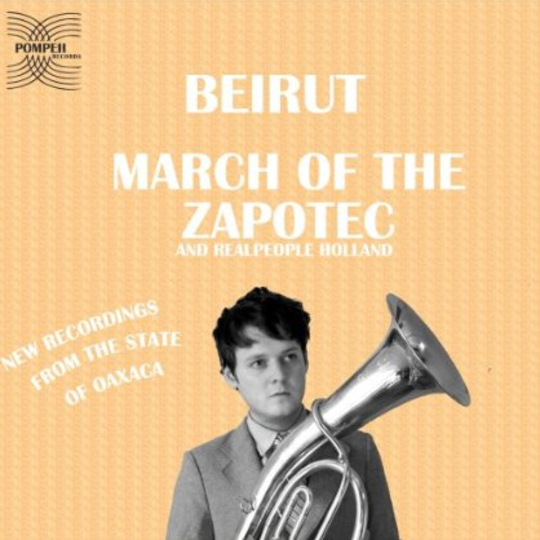 First of all, this is not the new Beirut album proper. Instead, we’re receiving two EPs that together comprise Zach Condon’s 2008 output – the first a collaboration with a Mexican funeral band, the second a resurrection of his early bedroom recordings moniker Realpeople. While good (very good, in fact), it's not exactly what you might have come to expect from this enviably talented young American.

For while the Zapotec EP is unmistakeably Beirut, it sees Condon marry his melodic verve with something almost imperceptibly darker. There’s nothing here in any way as instant as ‘Postcards From Italy’, ‘Elephant Gun’, or anything off The Flying Club Cup. His mindset, perhaps (for the second time Condon bowed out of touring commitments by cancelling many-a-tour date last year, effectively citing exhaustion as the cause); the arid surroundings maybe – or perhaps simply the nature of the work, as moments here do sound suitably funereal.

Give it time though: it’ll seep into your consciousness, lock and engage. Layers upon layers of brass that eventually come off warmer, grander and more precise than any before are steered by that voice, Condon’s velvet tones and keen sense of composition reaching their zenith on ‘The Akara’. Tumbling horns careen over minor chord ukelele, as he laments the “kite strings” that save him before he is, ultimately, saved. ‘La Llorona’ again brings his unfettered romanticism to the fore (“No man ever could steal her heart…”), while Chris Taylor of Grizzly Bear makes a guest appearance trumpeting on ‘The Shrew’. Soon apparent is a sense the panoramic Mexican filter through which Beirut’s established Gallic and Balkan influences trickle has blessed Condon’s project with perhaps its richest collection yet.

Which brings us to Holland. Two of these tracks have surfaced prior to this release – ‘My Night With the Prostitute From Marseille’ appeared on a digitally released charity affair compiled by one Natalie Portman, while ‘Venice’ featured on a compilation given away by uber-hip US monthly The Believer. In isolation, both were intriguing diversions from the trademark Beirut sound; nestled here among similar bedroom-electro gems, they sound less like oddities and more part of a coherent – though not entirely successful – ‘80s-influenced set.

It’s fine stuff, mind – and once you get over the contrasting musical backdrop Condon’s quavering, gorgeous enunciation finds itself atop, periodically superb (see: aforementioned opener ‘My Night…’, which intones little lyrically yet evokes untold amounts, or the chiming, addictive stabs of ‘The Concubine’). The bizarre, inconsequential Euro-pop of ‘No Dice’ upon which this collection unfortunately closes does mar slightly; though as a flipside to the superb Zapotec, Holland offsets proceedings in a manner admirably diverse.

To reiterate, then: it’s not the third Beirut album, like, proper. But as a means of sating collective appetites before that record does arrive – heightening expectations, even – it is a remarkable achievement.