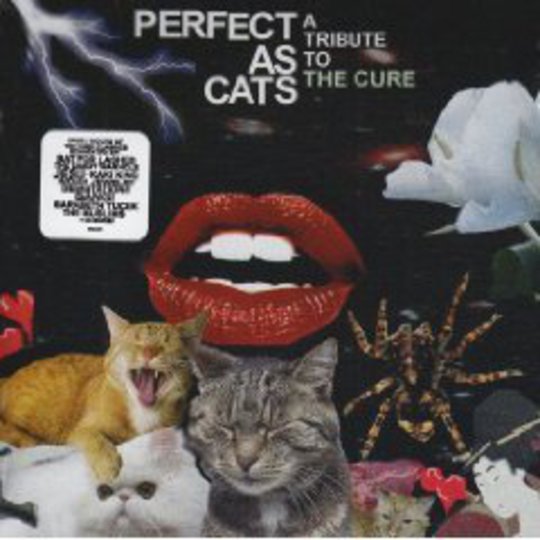 Before we get down to business, let's get one thing straight. Anyone expecting an album's worth of re-interpretations that match the calibre of Dinosaur Jr's 1989 take on 'Just Like The Heaven' - arguably one of THE definitive cover versions of any song ever and sadly not present here - will be majorly disappointed here.

Sure, there's an impressive guest list here on Perfect As Cats...; Mercury nominee Bat For Lashes, Anton Newcombe's nemesis' The Dandy Warhols and one-time associate Sarabeth Tucek, Devastations and highly revered post-rockers Jesu are just a few of the artists contributing mostly unrecognisable, and often disjointed reworkings of Cure classics that maybe would have been better left untouched.

'Perfect As Cats', you see, contains 33 tracks all plundered from various periods of Robert Smith and co.'s long career, and bar the odd gem - stand up Ms. Tucek and her disparate but triumphant performance on 'Three Imaginary Boys', as well as The Muslims' (aka The Soft Pack) frenetic 'Grinding Halt' - much of this album falls into the "trying too hard" category.

While credit must be given for the fact most artists here have chosen to completely revamp these songs rather than take the easy option of a straightforward note-for-note cover, it was always going to be the case that any cover version would be compared to the original, and if Robert Smith had intended 'The Walk' to be a squelchy keyboard-effects ridden slice of ambient electronica as Indian Jewelry have here, rather than the orgasmic sombre pop classic we've known it as for the past two decades I'm sure he would have done.

That said, Kaki King's semi-acoustic rendition of 'Close To Me' has a poignancy that's distinct from the original, while Ex-Reverie and Les Bicyclettes Blanches marginally off kilter deliveries of 'The Hanging Garden' and 'Hot Hot Hot' show a modicum of inventiveness without trying to be too clever or abstract. In fact, chop Perfect As Cats... in half and you may find a record here that does its subject matter justice. As it stands though, there are too many cases of hit and miss to fully justify 'Perfect As Cats' in its entirety.