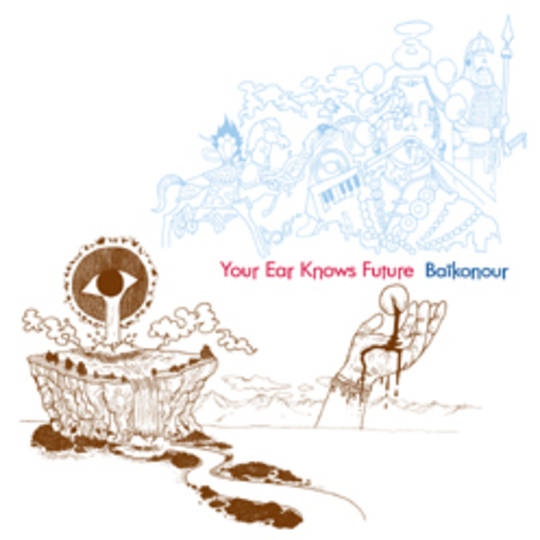 Some influences you don’t namedrop lightly, right? When some Head – sorry, I just channelled St. Julian of Avebury – when some Brighton-based French guy mentions Amon Duul II, Popol Vuh, Neu!, Harmonia, and a raft of other kosmische freaks, you tend to assume he knows his krautrock, and is ready to be hoisted by his own petard. The press release for Baikonour also mentions Air and Justice, and if that’s more your bag, you won’t be disappointed either, but the fact is, Baikonour still gets his cosmic groove on more like the 1970s influences of those two, and for my money that’s a better bet.

Fortunately, this is no obsessive experiment in recreating the past with vintage synths grimy with “Magic 70s dust”, and every last second sounds fresh. The massively catchy ‘Fly Tiger’ is one of a number of tracks that resembles French post-softrock group Cyann & Ben first and foremost, but otherwise Your Ear Knows Future feels like a gentle trip around Western Europe, during the Golden Age of experimentation that has since proven to be as crucial to 90s dance & electronica, as it has been to post-rock.

Before getting on to how fine Track 6 (‘Ye Ama Piooo!’) is, it’s worth regurgitating the story on the press-release. The title phrase is something shepherds shout in the Himalayas, when they’re lonesome in their valleys, and they want to see who else is around; it simply means “I’m doing your mum!” and tends to get a response. In other words: “Eastern culture and Eastern psychotropics went into this record, and the records we like, but we’re having a laugh about it, okay?!” So anyhow, this track’s basically the French cousin of Neu! classic ‘Hallogallo’ – it starts with a seductive, near subliminal pulse of bass, then brings in the fabled Dinger-beat, and then those gloriously pristine guitars that were first conceived as a new and positive sound, fahren, fahren, fahren with no speed-limit down the autobahn to the future, toward erasure of Germany’s post-war / post-Holocaust guilt, whilst discarding the tiresome imitation of “black American music” everyone else was ripping off in a gesture of cultural self-loathing. Okay, so that’s a paraphrase of Julian Cope’s Legend of Krautrock, but for me this really does feel like the actual Seeland around Duesseldorf – miles and miles of silvery lakes, blurred by ridiculous speeds, through the window of my father’s midlife-crisis-mobile, back when the Berlin Wall was still standing.

Next, ‘Tombahead’ is the kind of multi-segmented prog instrumental with celestial synths, phased guitars, grinding Hammond-organs, and bluesy descending basslines that made John Peel describe Pink Floyd as “the sound of dying galaxies” back when Syd was still setting the controls, and the UFO-club lived up to its name. After that, some more Cyann & Ben, and quieter tracks that evoke that historic turning point when (Eno collaborators) Cluster produced the first completely synthetic music elegant enough to sound pastoral, or like a microbial zoo, without reaching for the (fricking) flute-setting on the mellotron. All of this might suggest that Baikonour lack ideas and real Heads would be better off making a compilation. Not a bit of it – the truly groundbreaking record isn’t here yet, but this is the strong apprentice-piece (assimilating the forerunners) that promises a masterpiece, and more than good enough whilst we’re waiting.