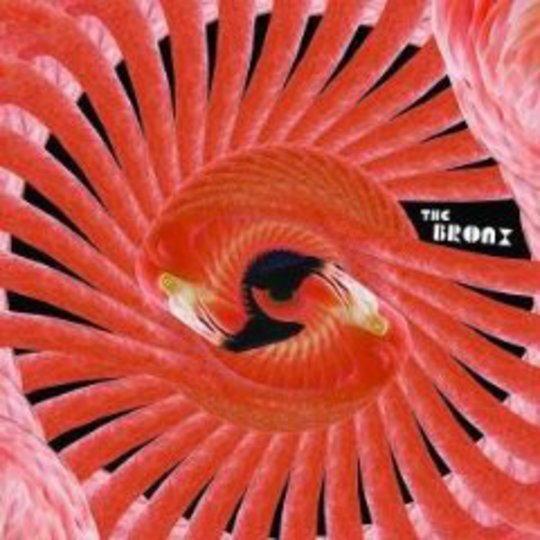 Before tattooed ginger people on the front of Kerrang!, before massively censored NME front covers (rendering the whole exercise a little pointless), there was The Bronx and the world seemed a far more vicious and exciting place back in 2003. The front cover of The Bronx first self titled album just spoke volumes; a bloodied mouth, with the claret formed into the name of the band. You couldn’t really argue with that.

Neither could you tackle the band’s sound either. It came at you like a wayward 12-wheeler. You may as well have chosen to stand in front of a train, for what good it would have done you trying to repel it. If you’ve heard ANY Bronx song, you’ll know the drill. Relentless screaming from Matt Caughthran., fairly standard hardcore chops, schooled in Sick Of It All, it’s all here. Any claim of moving on…well, has anyone actually claimed that? With no need to break away from their (dis)comfort zone, The Bronx dish out the kind of mean streets battering you want them to.

Of course, where they were excruciatingly vital in 2002, they were relatively ignored in 2006, and could be accused of being irrelevant in 2009. We now have a band who play 12 hour punk gigs in shop windows. What can The Bronx offer beyond infinitely shorter songs (no 18 minute punk rock epics here)? 'Inveigh' gives you all the answer you’d need: a roaring, riotous scrum in aural form. 'Past Lives' is practically anthemic – think 'Heart Attack American' and 'Notice of Eviction' – and you just KNOW in anyone else’s hands, this would end up sounding tired. Instead, it’s adrenalized knuckle-dusting, and the only endurance test here is your cardio-vascular limits and pain barrier.

Oh, and your patience. The Bronx only have two channels: ferocious and more ferocious. Let’s face it, being punched repeatedly in the face, then occasionally being kicked in the shin, is STILL taking a beating, right? Perhaps – and I’m only hazarding a guess here – that doesn’t sound like 30 minutes of your day well spent? Well, sure, maybe discussing nature’s rhythms with Animal Collective or follicle preening with Steven Malkmus have their charms, but are they as life affirming as The Bronx refusing to give an inch in the face of indifference?

'Ship High In Transit' delights in it’s abandon, 'Digital Leash' revels in it’s whiplash refrains and 'Pleasure Seekers' delves into its lumbering gait with glee. Nevertheless, the casual listener will have little to soak up from here, only surface bruising. The masochists amongst us already know we’re gonna get our kicks from this, so we won’t talk about our club if you... well, just steer well clear, yeah? You can wait for the Mariachi album next year instead, under the name El Bronx.