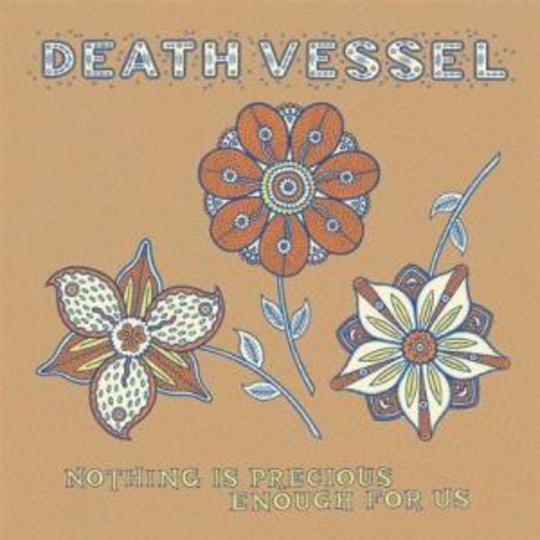 Blessed with the kind of softly expressive, androgynous-veering-towards-very-feminine voice that effortlessly captivates, Joel Thibodeau’s second album as Death Vessel certainly makes for an enticing prospect. A quick run-through of his touring compatriots is indicative of what we’re dealing with here (Iron & Wine, Low, José Gonzalez), though the trick and strength of Nothing Is Precious Enough For Us is how it reveals its charms gradually. Certainly, on a cursory listen there’s nothing here likely to stop you in your tracks – aforementioned voice aside – but through its sweet, dusty tone and lilting, unhurried sway, it sneaks under the skin; growing irrevocably in stature in the space between listens.

There’s plenty here to shout about – even (particularly?) if it’s not immediately apparent. ‘The Widening’ for example, replete with languorous brass, finger-clickin’ beats and shuffling drums – though still effectively steered by Thibodeau’s adept finger-picking – marvellously evokes a smoky bar-room vibe; likewise the crashing, incongruous electric guitars threatening throughout ‘Peninsula’ that finally make their entrance two-thirds in, subverting expectation and adding to the record a new dimension hitherto unforeseen. Well, okay – glimpsed at in the suitably bruising ‘Exploded View’, where picked banjo notes rest easy against waves of amplified chords.

On ‘Circa’ Thibodeau comes across almost pre-pubescent as opposed to feminine, thus reinforcing the expansive notion of innocence its interlocking melodies sketch out masterfully – as the song draws to its close these spiral towards a glorious jubilance. ‘Bruno’s Torso’ is one of the slightly more muscular cuts, where moments of gentle beauty abound and resonate through the emphatic chorus; ‘Obadiah In Oblivion’ sees a doom-mongering chronicle of the Old Testament referenced (its author recast as “a cripple and a crumb”) in a deceptively chirpy number.

Americana influences loom strongest on the banjo-led, slide-featuring shimmy of the exceptionally pretty ‘Fences Around Field’, which upon its halfway point transmogrifies into a hoe-down ditty evidencing Thibodeau’s intonation at its finest, as he seems to repeat the word (or not, as he often exhibits inclination towards words which aren’t actually words) “majorly”. Lyrically, Nothing Is Precious Enough For Us remains steadfastly oblique – snatches of verse describing first encounters with others marked by “bite marks and teeth” and being “perfectly none,” suggesting an underlying darkness. It’s fair to say though, that to analyse and deconstruct these songs too rigorously would be to miss the point, and potentially break the unique, beguiling spell they cast.

Make no mistake – from its initially unassuming opener (where Thibodeau tellingly declares his voice hurts “not from yelling, but from holding back”) through to the instrumental exeunt of hidden track ‘Taken Up Again’ – this is a blissful, radiant, rewarding listen; one recommended without hesitation.