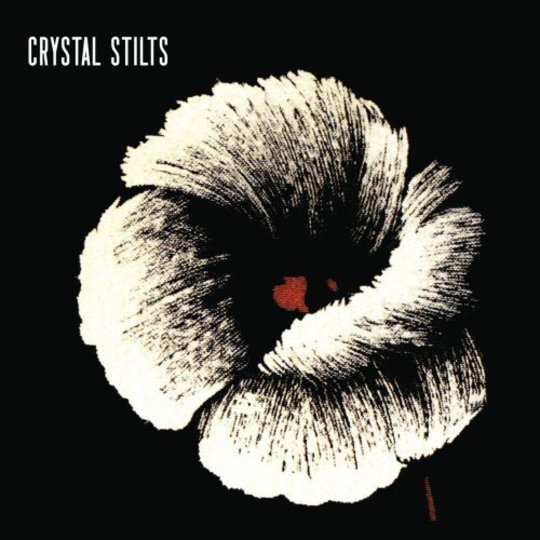 Upon first hearing Alight Of Night you could be instantly forgiven for thinking it was 1986 all over again. But trust me, that really doesn't tell anywhere near half the story. Go through each of the eleven songs that make up Crystal Stilts' debut long player and it almost feels like being driven through a guided tour of rock'n'roll's most incisive, dare I say coolest, esprit de corps of the previous four decades. What makes this record even more alluring is that rather than getting bogged down by basic primal instincts like a million and one ladrock bands and awful 1980s pastiches, Crystal Stilts actually use their undoubted retro nuance to create something entirely unique, and ultimately modern sounding in the process.

It's not as if Crystal Stilts have just stumbled upon their era rather than genre cross-pollinating vision by chance either. Initially formed in Florida as far back as 2002 by vocalist Brad Hargett and guitarist JB Townsend, their first release, a self-titled 12" single some three years later actually featured embryonic versions of three of Alight Of Night's most precious moments. In the interim years, they've been steadily perfecting their sound, honing (and in some cases building up) the songs while relocating to New York and recruiting band members, including one time Vivian Girl Frankie Rose on sticks duty. One would also suspect that over that time they've been broadening their listening horizons too, as the closing shimmer of 'The City In The Sea', one of the newer songs here, could quite easily be The Velvet Underground if they'd been born some twenty years later and grown up listening to the Chemikal Underground roster rather than the Flying Nun and (early) Creation ones that feature so prominently at regular intervals on Alight Of Night.

Although initially released towards the back end of last year on excellent US indie Slumberland, Alight Of Night found itself lost in the annual Christmas rush. Fortunately, London imprint Angular saw the potential of both band and record were too good an opportunity to turn down and so here it is, four months after its initial release, re-packaged and almost certainly destined for many end-of-year "Best Of's", even at this early stage of 2009.

Musically, Crystal Stilts' use of analogue recording equipment not to mention a healthy dose of feedback and distortion creates an eerie vibe throughout the whole album, ably polished off by Hargett's haunting, sometimes lyrically unintelligible but never too understated vocal. Opening gambit 'The Dazzled' for example sounds like Iggy Pop's 'The Passenger' if The Addams Family cast had re-recorded it as their theme tune, original 1964 members of course. Take one step further into 'Alight Of Night' and a crescendo of surf-twang guitar a la Link Wray and Farfisa organ acts as a portal to Crystal Stilts next level, their eponymous statement of intent mentioning "distorted dreams" through its own self-imaginative haze of fug and noise in one of the album's more radio-friendly exercises.

Its hard to pinpoint one exact highlight on an album that boasts so many throughout, but 'The SinKing' and its referential doff of the cap to My Bloody Valentine's least affectionate Gun Club swooning period comes close, as does possibly the oldest song on the record, 'Departure', revamped and retitled from its earliest release on the previously mentioned EP back in 2005. Here, its upbeat graveyard stomp, engulfed in Townsend's studied licks and organist Kyle Forester's perspicuous interludes recalls what the soundtrack to much-revered London niterie The Batcave must have sounded like back in 1982.

Although there is a definite feel at times that Alight Of Night could almost be a concept album; Hargett's monotone larynx, the less than conspicuous referencing of the "dark side" throughout, the almost continuous flow that implies Alight Of Night when listened to closely (and preferably with a lyric sheet at hand) could almost be the hidden script of a long-forgotten b-movie revealing itself in a modern-day art form. Nevertheless, every single song on this record when heard in its own right stands up quite admirably and even the album's less-prominent numbers such as 'Bright Night' and 'Graveyard Orbit' soar above almost all of Crystal Stilts' peers on the basis of mystery (not to mention individuality) alone.

Quite simply, Alight Of Night is one of the most breathtaking records these ears have been partial to in a long while, and even if Crystal Stilts never make another record, their legacy is assured.