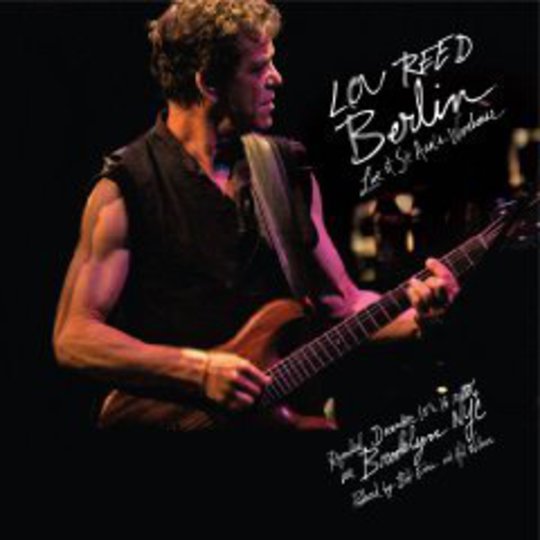 Though Lou Reed was probably born clad in leathers, aviators and a dead-eyed glare, you can't help but feel that of late the old sourpuss has been trying to tell us he just wants to be loved. Yeah, 'challenging' double albums about Edgar Allen Poe and a penchant for stonewalling interviewers over questions that aren't about Tai Chi send out one message. But the rubbish hit charity reworking of 'Perfect Day', the rubbish hit dance remix of 'Satellite Of Love', the rubbish hit Killers song 'Tranquillize' and the fact his 90s solo output consists of two studio records and 23 kerjillan best ofs; well that sends out a different one.

Last year he issued a record called_ Hudson River Wind Meditations, an album of, I dunno, chanting or something, which so few people care about or have listened to that it may in fact not really exist. But that's okay, because at the same time he's been busy completing the slow but more or less unequivocal rehabilitation of two of his most maligned 70s records. _Metal Machine Music's journey from weird joke to avant-rock touchstone reached its conclusion with last year's live reinterpretation in the company of German classical ensemble Zeitkratzer. And now we have this document of the tour for 1973's Berlin, a jaunt that was put on hold until 33 years after the record's release because poor Lou was upset that hardly anybody liked it at the time.

You can sympathise with him, mind. Years of rock criticism have elevated the record's bleakness to near-mythic proportion, but if the lyrics – the story of a family disintegrating under hard drugs and hedonism – provide Berlin with a backbone of sinuous despair, it's a far lusher, more sonically approachable affair than, say, Closer or The Holy Bible. Er, well, that is apart from the bit on 'The Kids' where producer Bob Ezrin drops in a recording of his sprogs weeping after he told them their mum was dead. That's kind of grim.

Er, anyway, Berlin: it's good, you're probably aware of this. Berlin: Live At St Anne's Warehouse is a bit more of a mixed bag. Certainly when the title track kicks in to the sound of audience whoops, the line "In Berlin, by the wall / you were five foot ten inches tall" is croaked with a death-rattle lack of whimsy, and it all comes with piano the average wine bars might ban as too tasteful, you can't help but think something's amiss. And when 'Lady Day' and 'Men Of Good Fortune' follow, unsubtly embellished with back-up singers and boiling guitar solos, any sense of this being a concept record goes out of the window. With Reed's narratorial delivery gone, and flourishy extended solos demarcating the tracks heavily, there's little sense of a story being told.

But screw it, these retakes are forceful rather than crass, colourful rather than gaudy, and if they separate the tracks from each other, they also give them a power independent of each other; walloping, intelligent, orchestrated rock songs rather than fragments of a tale. Plus, in the second half something weird happens: the spirit of Berlin returns. There may be no real narrative, but by the time he ploughs into 'The Kids' with an ugly sneer, the gut intensity of the performances has immaculately meshed with the seedy despair of Berlin's second half.

Then we have three extra songs. Whether Reed put much thought into their selection I dunno: 'Candy Says', reworked into a duet with Anthony Hegarty, is nice but feels a little curio-ish where it might have been more thematically effective amidst the Berlin material; 'Rock Minuet' – from 2000's Ecstasy - is on the pointless side; but a spirited blast through 'Sweet Jane' is generously cathartic.

So yeah, Berlin: Live At St Anne's Warehouse is basically one of the most creepily eloquent records of Lou Reed's career, tarted up in the sort of bombastic style that ironically may see it received better in the classic rockin' days of 1973. Yet it's genuinely enjoyable and, against all odds, it has by the end tapped into its parent record's damaged power. It's still unequivocally less good than_ Berlin_ itself, so I'm a bit vague on who it's for – I guess Reed junkies, curious downloaders, people after a tour souvenir and perhaps those who found the original album just a wee bit too depressing. Whatever the case, it exists, and it's pretty good. Lou's accommodating like that.