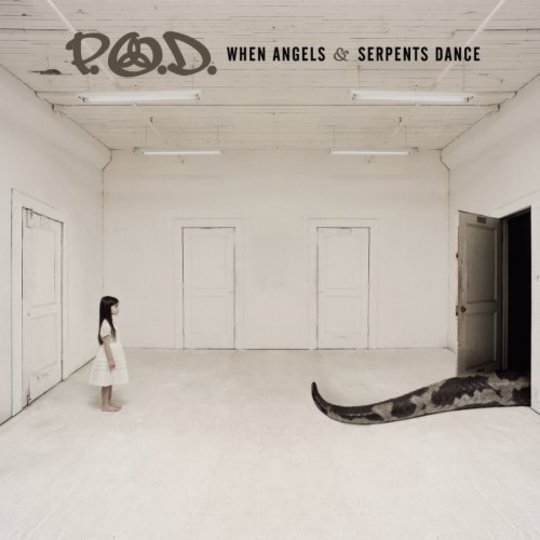 Eight years on from P.O.D.’s last Grammy Award, and with ever lower chart-placings for their singles – even in America – I’ve finally cleared my backlog of genuinely interesting cultural developments, and happen to have a spare minute to contemplate what Christian Metal actually means. (Plus, I’ve been thinking more positively about Christianity, and virtuoso guitar-playing, of late, so, I’m not going to rip into POD for the sake of it.)

Briefly: if you really like Red Hot Chilli Peppers and the first three Extreme albums, then you might love this, although I can’t imagine being drunk and a little high at a stranger’s party and suddenly finding the song playing a guilty pleasure, as has happened more than a few times with RHCP. (It takes a certain amount of CNS-depressants to switch off my ideological bullshit-detectors.) This is the Evanescence boys can sing along to.

On the surface, then, it’s utterly inoffensive, and if you took away P.O.D.’s f/x pedals, erasing the obvious signifiers of mainstream metal, you’d find that much of the album resembles post-9/11 Bruce Springsteen, albeit with zero narratorial skills; that’s to say, it’s musical populism basted with something-for-everyone genre-pastiche arrangements, and all as a means to impart vague messages that might be mistaken for liberalism. Did I just say “liberalism” w/r/t a Christian Metal band? Why Yes, but that’s because most populists sound liberal unless they’re preaching to an isolated community, the White Knights of Venice Beach, say – repeatedly we learn that Hope Is Good, War Is Bad, Hate Is Wrong, and people you don’t understand (women-folk, natives of San Francisco, Moslems, etc.) are invisible.

Remember, ideology is everywhere, especially where it’s conspicuously omitted, e.g. ‘This ain’t no ordinary love-song’, which A) ain’t, and B) betrays such a pathetic “lights-off” attitude to sex that it makes Chris De Burgh seem risqué, singing about _“kiss[ing] those velvet lips” _(“Mummy! The funny Smurf-man just sang about cunnilingus!”) Musically, the song cribs from ‘House of the Rising Sun’, which is lazy enough (the song most guitarists in the Western world learn first? Hmm, better confuse the listener by insisting, several times, the song “ain’t ordinary”!). Then, the lover in question is rendered invisible, a void for him to spill his word-jizz into – does she even have lips? Mostly, when I hear a non-gender-specific lyric, I assume the singer’s gay, but doesn’t want to alienate hetero listeners, or is so used to being linguistically evasive in a homophobic world, it inflects their lyrics. This song just makes me wonder whether the singer’s frightened of where he puts his pecker.

Okay, zipping through the rest: ‘God Forbid’ feat. Page Hamilton. The guest-artists tell you what it’ll sound like: machine-gun bass, a la Machine Head, Metallica, etc. One memorable lyric goes “insanit-AY / is just a thought awa-AY!” because, you know, mental illness is, like, the worst kind of horror, you know, because it’s like, REAL, man. ‘Roman Empire’ sounds a lot like late-Waters or Gilmour-era Pink Floyd, although P.O.D. probably want you to think it’s Mars Volta, because (somehow) the latter are hip. Title track, and inevitable schmaltz-fest, ‘Where Angels & Serpents Dance’ is followed by ‘Tell Me Why’ which has a xylophone, viola, and lines like “the rich getting richer / while the poor become slaves” as well as “why must we kill in the name of – ” without completing the sentence. Wow – referencing Neil Young and Rage Against The Machine in the same song! (It’s always the Rage-fans who show they’re sensitive side with some Neil). Oh yeah, and the song “feat. The Marley Girls”? Yer akshel Rastafarianism is Conservatism without the laissez-faire Capitalism. P.O.D., however, famously turned down a $100,000 deal in 1998, because God told them a better one was coming. Jay-sus – “when Babylon comes for I”? Mate, it’s already got you!

So, who am I writing this review for? Well, for those of you with younger brothers or cousins or nephews. Give’em Never Mind the Bollocks – musically, it’s Definitely Maybe, but the lyrics should open their minds to the hypocrisy of nationalism, neglect of the mentally-ill, the machinations of the industry, and how all that anger can actually come from love of the people betrayed. Alternatively, wean them off the sensitive hard rock with In Utero but don’t stop there. If it’s beats they like, try Public Enemy, or El-P. For God’s sake, though, don’t let the Man take another young mind. THIS is how the Devil gets you.