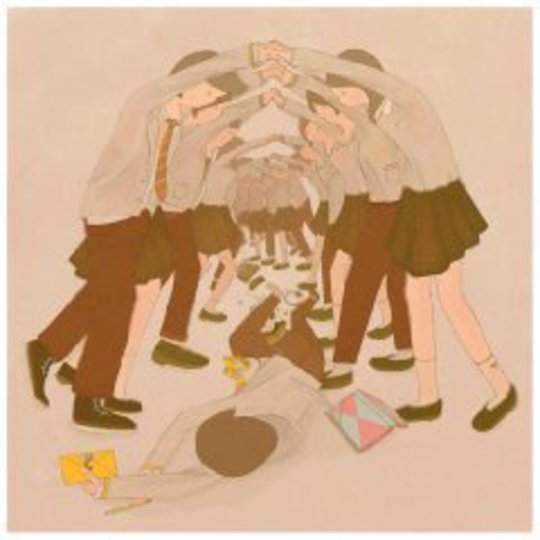 Perhaps not the best to way to prepare yourself for words you know you’ll soon be penning on a specific artist is to throw yourself into their back catalogue. In this case, however, when I say “back catalogue” what I really mean is the two shimmering nuggets of laptop-pop genius Marc Bianchi has posited in his 12 years trading as Her Space Holiday, namely: 2001’s ‘The Ringing In My Ears’ (last.fm) and 2003’s ‘My Girlfriend’s Boyfriend’ (video). Although surrounded by relatively transient album tracks, Bianchi’s sporadic prowess with a tune – as well as the company he keeps – has always endeared him to this critic, and the announcement of XOXO, Panda And The New Kid Revival heralded if not a double-footed leap of joy, certainly a raised eyebrow and fuzzy, dual sense of a) knowing exactly what to expect and b) being pretty happy about it.

Cut to: cursory perusal of the press release and the cryptic biography on the official website, which reveal he’s ditched the laptop and gone for an organic, folk-inspired full band approach. Which, to revert to this increasingly convoluted scribbling’s opening suggestion, saw me not emphatically chucking on the album, but instead bathing in the pop-savvy finesse of those earlier tracks. For while sensitive singer-songwriter types with acoustic guitars remain a fundamental weakness of mine, surely – surely by this point we have enough of them? I mean, seriously. There are loads. Sorry Marc?**

The self-explanatory incantation of the above little number would, however, be a falsity on Bianchi’s part. For while this album is guilty of many things: unwieldy of title, at least three tracks too long and hardly replete with groundbreaking new ideas, it’s also warm, pleasant and undemanding – in a manner that's totally fine. There’s nothing that matches ‘The Ringing In My Ears’ in terms of first impressions, but there’s plenty that charms, the melancholy that enveloped much of his earlier output all but absent. The acoustic guitar and toy-piano lilt of love letter ‘My Crooked Crown’ veer dangerously close to cloying but get away with it – just, while the subsequent ‘Four Tapping Shoes And A Kiss’ is more expansive, fuzzier, dirtier than much of the preceding and all the stronger for it.

Bianchi’s delivery, in its unmistakeably West Coast inflections and bright, unabashed tone is sure to vex many, but in its evocation of countess sunshine-pop aficionados (the likes of Beulah, Fiver, Grandaddy and all the cues from where they drew inspiration) it exhibits worth through association alone. Also, torpor shrugged off, it’s strong and assured on this record (which, it soon becomes apparent, pitches itself a concept album of sorts), particularly as it nears its jubilant close.

“So we sa-a-at and we talked about how we spent our years, with the laughter and tears / On big white beds with old grey sheets, it was just like being back on that swim / This is la-la-la-la-la-la-la-love” – ‘Two Tin Cans And A Length Of String’

Again. Read the above again. Seriously. The thing is, these are just the kind of lyrics and suggestions that, by dint of his appeasing melodies and production nous, Bianchi pulls off with ease. By the time the album comes full circle with ‘One for My Soul (Good Night)’, we find him again proclaiming the “start of the new kid revival”, and it’s hard to doubt his conviction, optimism – simply, how much of himself you feel he disseminates into his work. Save this and the opening, there isn’t another track with the same wistful appeal of that earlier pair, and as stated, 14 of them pushes it some. Yet for successfully broadening his palette Bianchi deserves plaudits aplenty – after all:

“If life is one big symphony, don’t play your part too cautiously” – ‘The Day In Review’