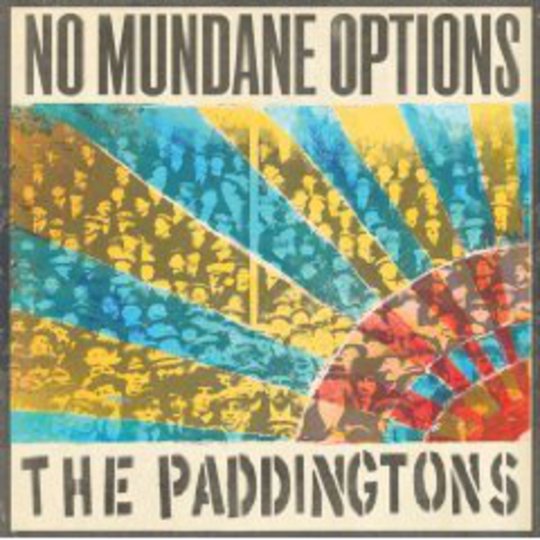 Come on now, be honest: was that the mindset you equipped yourself with upon clicking through to this review? In the interest of full disclosure, it’s one this reviewer found himself in when the album found its way to his doorstep. Formerly signed to Alan McGee’s Poptones label, beloved of a certain Pete Doherty and of a debut album produced by Owen Morris (Definitely Maybe), it’s fair to say that three years on from that record (aptly titled First Comes First), the world isn’t exactly beating down the band’s door for new material. Yet here we stand – No Mundane Options blaring from my speakers, released through their own label as a means of avoiding "all the other shit record companies like to put bands like us through." By no means a travesty, it… Well. It’s okay.

But let’s gather ourselves, shall we? Through the support of those aforementioned, it’s fair to say the band – whether wittingly or not – aligned themselves with the kind of figures all capable, in their heyday, of creating a fervent sense of passion and excitement. McGee perhaps most notably (the hyperbole whipped up by his support of Glasvegas alone still resonating throughout the wider music press), but Pete Doherty also; overlook the widely-derided red-top caricature of today and remind yourself that at his most eloquent and tune-savvy, his was a talent – a charisma – that coupled with the more sullen charms of bandmate Carl Barat, inspired legions of fans to their cause and – for a while at least – placed The Libertines irrevocably in the hearts of many, despite all that followed.

The Paddingtons suffer by implication. For one reason or another (the simplest explanation the most likely: that the debut album wasn’t any good), even given the smattering of well-received shows, they never really grabbed the mantle or fired up the collective imagination of those that would surely make up their biggest audience. In the three years intervening, they have: given up being a band; decided to be a band again; relocated to New York; cavorted with the likes of Adam Green and Sean Lennon; organised a well over-subscribed Love Music, Hate Racism show in their native Hull; got on the wrong side of Johnny Borrell in Spain; and, finally (perhaps most jarringly), written an album and had it recorded by Mogwai/Belle & Sebastian producer Tony Doogan.

As much as these antics and associations may be part of a concerted effort to elevate the band above the remnants of a scene in its final death throes (Dirty Pretty Things calling things a day to general indifference just about sums things up), they remain depressingly, predictably futile. From the outset, No Mundane Options drifts by without asserting itself. Inflammatory song titles (‘Punk RIP’, ‘Molotov Cocktail’, erm, ‘Gangs’) are no match for honestly rabble-rousing efforts, and while there are no outright clangers to be found, The Paddingtons remain light years away from producing anything of real spark. Tom Atkin’s flat and indistinguishable vocal doesn’t help; nor do the lyrical platitudes on offer (“Life can be so fantastic!” – ‘Plastic Men’ “Oh! You’ve seen it all before / Knocking at your door!” – ‘Stand Down’), and nor does the sheer, unavoidably derivative, sub-Libertines nature of it all.

In their defense, a couple of tunes here are…y’know. Alright. Instantly forgettable, perhaps, but hardly offensive in their stride. ‘Shame About Elle’ – all acoustic guitars and prodding bass – is something approaching sweet before a slovenly, unnecessary chorus dashes the effect somewhat, and similarly, only a bout of lazy lyricism really hinders ‘You And I’ from a melancholy almost graceful. ‘Sticky Fingers’ features some relatively satisfying lead guitar from Josh Hubbard, but can never quite be anything but rather dull.