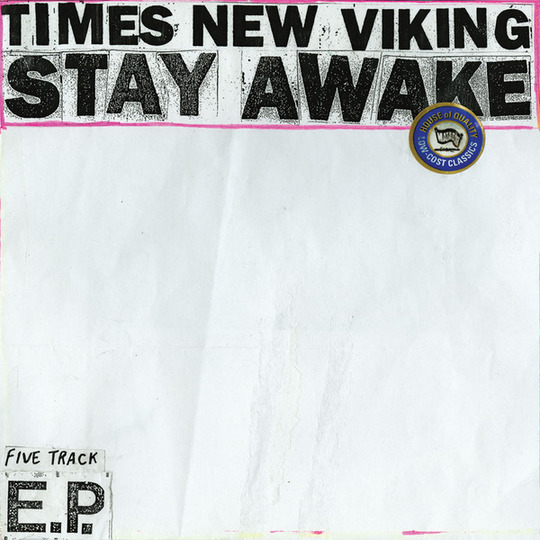 Some people say things about ostensibly shitty sounding bands like Times New Viking such as "if they don’t care about how they sound then why should we?". There are several easy answers to that, but the most pertinent is "if you can sound this close to an actual junkyard while still salvaging some of the best pop hooks around then why does it matter?". It's nothing new to sound as thrashy 'n' trashy as this, of course, but somehow TNV make their scuzz different by paying equal attention to aesthetics and pure pop as ear-searing noise. That must be why they sound so refreshing.

Spastic pleasure seems to shoot out of these new songs like hypercoloured laser beams, but still their noise is set firmly in treble territory. 'Call and Response' opens things up with squiggly high guitar melodies and three excitable kids screaming a chorus in what sounds like a concrete walled garage. 'Pagan Eyes' kicks off with one of their catchiest guitar lines yet but gives way to an abrupt combined vocal. And even though it's to be expected after all those explosions of keyboard and guitar joy on Rip It Off, these contrasts still come as a bright, ecstatic surprise.

Their songwriting here, then, betrays not just a love for interesting sonics but hooks and harmonies too. Contrary to popular belief, they aren't just about obscuring their melody behind tape hiss and grungy no-wave like a lot of their similar sounding peers. Or maybe they are, and just so happen to be extremely good at writing pop jams and playing them with ridiculous pleasure at the same time.