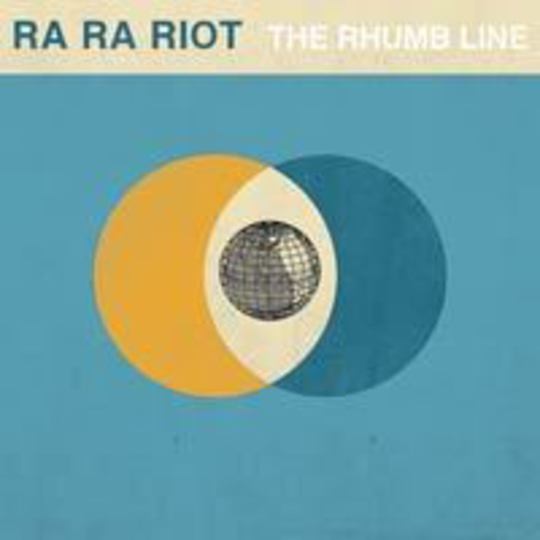 Those of us who remember Princess Diana's death are probably of a cynical enough bent to recall it as a pretty ridiculous affair; millions of people reduced to histrionic wrecks by the demise of a faintly ridiculous celebrity none of them had ever met. It still seems kind of overblown (I mean, she was basically a soap opera character, wasn't she?), but 11 years and a few funerals on, I can understand it a bit more. Nobody shows you the way to grieve, and so outside factors – be it a book, a film or a government-staged outpouring for a public figure – can act as lightning rods for the pent up charge of loss you've been holding onto for too long.

This is why The Rhumb Line has a power beyond the sum of its immaculately crafted chamber-pop parts. If you know anything about Ra Ra Riot, you'll know their original drummer, John Pike, tragically drowned last summer. Know a bit more about them, and you'll doubtless be able to point out that the songs on The Rhumb Line that would most obviously appear to deal with his death – 'Dying Is Fine', 'Ghost Under Rocks' – predate his passing, and were indeed co-written by him. By-and-large, that's all irrelevant: even at its chirpiest – and there are aviaries less chirpy than some of the choruses here - this record is luminous with loss, and if you've got a heart it will set you reeling every time.

Take the cover of Kate Bush's 26-year-old slice of witchy vaudeville, 'Suspended In Gaffa'. Objectively what RRR have done is take a tune from The Dreaming - one of the most inventive pop records ever created - and fattened it up, smoothed it out, and turned it into a piece of autumnal college rock not dissimilar to the nine other pieces of autumnal college rock here. But it carries so much hidden weight, the sad, rustic waltz and tumble of the verses collapsing under Wesley Miles' sighed "We can't have it all", the pristine chorus poleaxed by his plaintive "I don't know why I'm crying/Am I suspended in gaffa?". Under Bush's steerage the song is an eerie, dislocated piece of surrealism about seeing the face of God; reimagined and made less alien, it sounds like a painfully perceptive articulation of the shock and numbness of loss.

You can obviously be cynical about all this. It's worth bearing in mind the band come armed with a string section: Dick Cheney himself could probably only hold the waterworks back for so long against the weepy onslaught of a skilfully wielded cello. And maybe Miles' voice radiates sorrow not because he was re-recording 'Dying is Fine' scant months after the death of his friend, but because he's a mournful-sounding vocalist by default; he wouldn't be the first. So shrug off that emotional heft, and you've still got a sweet, unpretentious indie-pop jewel, cut with care and warmth.

Miles has a way of firing a simple enough line straight into the depth of your brain: 'Winter 05''s "If you were here winter wouldn't pass so slow", 'Dying Is Fine''s "Maybe I wouldn't like death if death were good". And from the moment 'Ghost Under Rock''s pulsing sepia highway ushers the record in, the music is immaculate, crisp and rosy as the perfect October sunset, strings swelling and cascading like a russet-hued heartbeat. You could peg it someplace between Vampire Weekend and earlier Arcade Fire and not be too far off the mark, accepting Ra Ra Riot exhibit little of either's more progressive side.

But if that's all you can hear, I feel sorry for you. Loss flows through The Rhumb Line's veins, ineffable but vital. Someday I'm sure I'll turn to this record for consolation, and for that I'm both sad and grateful.