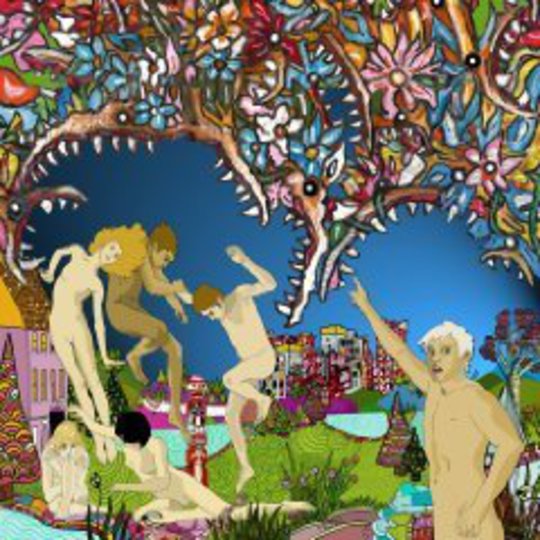 Of course we're all indie-rock fans here, but really, is there a genre more contemptibly indulgent of conservatism? If it was r'n'b, metal, hip hop, jazz, visual art, live art, heck, even mainstream pop, the pressure to innovate - or at least to pretend to – would be indescribably heavier. I'm not saying there's no backwards-looking metal, and I'm not saying that the definition of indie hasn't become so problematic that more innovative bands don't get shunted into other generic pockets. What I am saying is that the Incas could scarcely have been more astonished by Cortez and cronies than some people appear to be by Glasvegas, and that's goddamn depressing.

Of Montreal are pretty unquestionably an indie outfit. And they – or at least Kevin Barnes, who effectively is the band – have made an album called Skeletal Lamping that's so psychotically overambitious, so ballsy, bewildering, beautiful, mad, terrifying, romantic, depraved, unwieldy, illogical and just plain wrong that it shames the aspirations of near enough anyone you might call their peers.

If last year's breakthrough Hissing Fauna, Are You The Destroyer? was a bleak artistic supernova erupting from Barnes' broken marriage, it was also OM's most accessible record: you'd have to be made of stone not to empathise with his self-lacerating poetry, or, at the least, not to shake yo' booty to the album's febrile, lustrous electropop.

Skeletal Lamping is the messy, difficult fallout that comes after. It's notionally about the misadventures of Georgie Fruit, the sexually venturesome 'black shemale' alter ego that Barnes – with characteristic blend of piss-taking and bona fide weirdness – retrospectively adopted to describe the joyless non-stop party he fell into after abandoning his family.

And it's fucking mental, a priapic patchwork of fifty or so tiny songs (15 tracks are billed, but they're subdivided into a myriad songlets) taking in a lunatic diversity of styles – predominantly intricate knots of funk and disco, but freely chucking in dollops of noise rock, MOR (opener 'Nonpareil Of Favor' features both), and a dozen other styles (Barnes' numb rap on 'Women's Studies Victims' is both riduculous and chilling). Stitched into the maelstrom is a lyrical kaleidoscope of perverse sexual appetite – "I want to make you ejaculate 'til it's no longer fun" "you're the only one with whom I'd roleplay Oedipus Rex" – and jaded expressions of regret – "why am I so damaged?" "wanna fire all my friends and just start over again". It's overwhelming, like being barraged by radioactive fragments of another man's soul.

Yet much as the constant segues and stylistic shifts disorientate, they yield a harvest of magical moments: the self-pitying 'Touched Something's Hollow' barely concludes before 'An Eludarian Instance' blazes out of it like the dawn, a barrage of sun dappled brass cradling a recounting of how Barnes met his wife, an oasis of innocence and purity in the mucky mire of sleaze and disaffection.

And Georgie Fruit? Convoluted conceptualising or not it's only ever been Barnes, and really Skeletal Lamping's lyrics essentially feel like a more impressionistic revisiting of Hissing Fauna's confessionals. For all the smut, Barnes doesn't sound like he's having fun; rather he comes across as a lost soul who wishes he could repair his life but hasn't got a clue how to do it, a feeling only reinforced by 'An Eluardian Instance''s hallucinatory interlude and 'Plastis Wafers', a seven-minute Sonic Youth-meets-The Bee Gees-meets a billion other styles descent from prurience into panic.

On his blog, Barnes has talked about how lamping is a practise wherein hunters illuminate woodland in order to flush out game, and that Skeletal Lamping is an attempt to do the same with his personal demons. That would seem correct: this record is the filth and the scum, the hopes and the fears, the perversion and the innocence of one brilliant, dissolute mind, blasting forth like a natural disaster. It's not easy at all, almost Joycian in its demand to be absorbed piece by piece. Some people are going to think this is a masterpiece, the equal of Hissing Fauna. Others will call it a self indulgent mess that pushes indie-rock somewhere it really wasn't meant to go. Personally, I think both those sound about right.