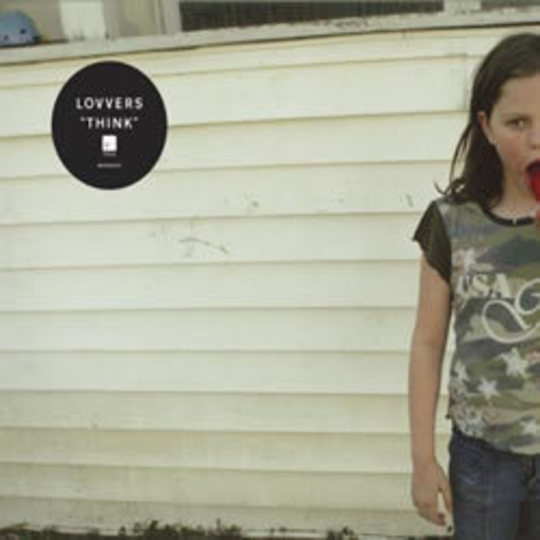 If there’s one thing that surprises on Lovvers’ inaugural release on the esteemed Wichita label (following three seven-inches on Jonson Family and a split on O.I.B), it’s not the brevity, power or veracity on display – though these things are abundant in its bracing 13 minutes – but the decisive grasp of melody held throughout.

Here, waves of muscular riffs are bolstered and steered by gargantuan basslines and juggernaut drums. Fans have come to know what to expect from this band (among whose number is vocalist Shaun Hencher, formerly of the very wonderful The Murder Of Rosa Luxembourg), and they’re not about to be disappointed. The longest of its seven tracks, ‘Human Hair’ opens proceedings with startling effect: an incendiary two minutes, thirty-six seconds where distorted vocals sit alongside loose guitars that cascade over and collide into each other with abandon. Volume swells, and alongside requisite barnstorming riffage, clean, almost surf-rock guitars chime in before finally morphing into the riotous ‘No Romantics’.

A cursory glance through its tracklist may suggest a somewhat nihilistic take on the world – a youth repressed, smothered: ‘Teenage Shutdown’, ‘No Fun’ and ‘Wasted Youth’ follow, though the overriding sense isn’t of anger; more one cathartic in its stride – dispossessed from society this Nottingham troupe aren’t, though a reputation for fearsome live shows does hang over proceedings. Of the three, ‘No Fun’ – in its battering drums and mid-point breakdown impresses the most (“Start again! Change the channel!”) – though all are strongly of merit in their rampant, willful exuberance. The ‘50s vibe present on ‘Human Hair’ reappears on anti-anthem ‘Wasted Youth’ with a flourish – a four-chord chorus as brash as it is perfect/perfectly short-lived, perhaps the out and out poppiest hook on the record. Hencher’s churned-up, spat-out vocal delivery here, as on the rest of Think, is often unintelligible and almost buried in the mix, but it’s honestly hard to imagine it fitting any other way.

Returning to, and evaluating, an earlier point – is it really such a surprise that the whole affair is sewn together by such melodic clout? The enduring, seminal mainstays housed under the loosely categorised ‘punk-rock’ umbrella have never been shy in offering memorable tunes to the world. Nirvana, Iggy And The Stooges before them, more recently Les Savy Fav: their records revolve around straight-up, no-nonsense tunes. Lovvers, as well as shouldering these (frankly massive) comparisons with ease, are no different.

On such a spiel as that touched on above, whether there’s anything in this offering that hasn’t already been felt, exorcised or breathlessly relayed by key players in this scene isn’t the point at this juncture – it’s the conviction and swagger that convinces, and few round these parts do it better. Bruised, but never unduly bruising; angry yet not once overly acerbic: do away with tinny headphones, computer speakers and polite decibel levels – let this scrappy, beautiful, brilliant record consume you.