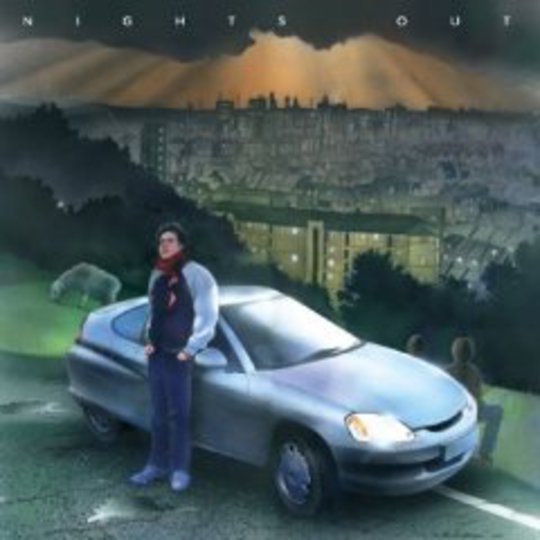 The second album from Joseph Mount’s Metronomy project (and first that sees the band billed a trio) sees electronic disco leanings meld with a welcome sense of warmth and songcraft, immediately positioning itself alongside such recent releases as Neon Neon's kaleidoscopic Stainless Style (reviewed), Cut Copy's superlative In Ghost Colours (reviewed) and M83’s gorgeous latest, Saturdays=Youth (reviewed) – all fantastic cuts, all strongly in thrall to that decade that has informed so much musical output of late: the 1980s.

The artwork itself is a giveaway. Beneath dark clouds a fluorescent night sky shimmers above a city’s sprawl. A sheep grazes. A scarf-wearing young man, uncanny in his resemblance to Mount, leans against a sleek saloon, hands tucked in pockets and gaze raised to the heavens. The imagery is perfectly resonant of Donnie Darko’s wholesale nostalgia through Teen Wolf, Back To The Future and other canonical films of the era itself. Heck – the cover’s right there, you don’t need me to describe it for you. Graceful, cinematic and wholly evocative, it's a sweet, apposite reflection of the musical contents lying within.

Of these, 'Heartbreaker' (video) is undeniably the album’s nexus – an assured, infectious number belying the fact it wasn’t until this point Mount took it upon himself to add his own vocals to the mix. That tune makes for a single both pounding and mournful in its stride – a melancholy both poised and without pretence – recalling Hot Chip's 'Boy From School' (

) in that respect, and the buoyant, synth-led swell of New Order and Depeche Mode (sans gloom) in turn.

Toweringly fine as 'Heartbreaker' is, it keeps good company here. The 'Nights Out Intro' & 'Outro' pair bookending proceedings make for an enveloping, inviting open and wistful, crackling farewell respectively. ‘Twixt these, the charm of mid-paced floor fillers such as 'The End Of You Too' and 'A Thing For Me' rests as much in their heart and sincerity as it does their sonic splendour.

'Radio Ladio', 'Holiday' and a motorway-themed couple all captivate accordingly, an intuitive blend of clipped guitars and radiant synth (Gabriel Stepping and Oscar Cash complete the trio, friends since their Devon schooldays) lacking the bluster that occasionally mars across-the-pond-counterparts Ratatat (latest: LP3 (reviewed) – as with Mount, also famed for their impressive remix pedigree).

The joy and longevity emanating throughout is at once jubilant and effortless: a luminescent pop-not-quite-masterpiece as much an indication one waits a little further down the road, Nights Out is eminently worthy of your time and investment.