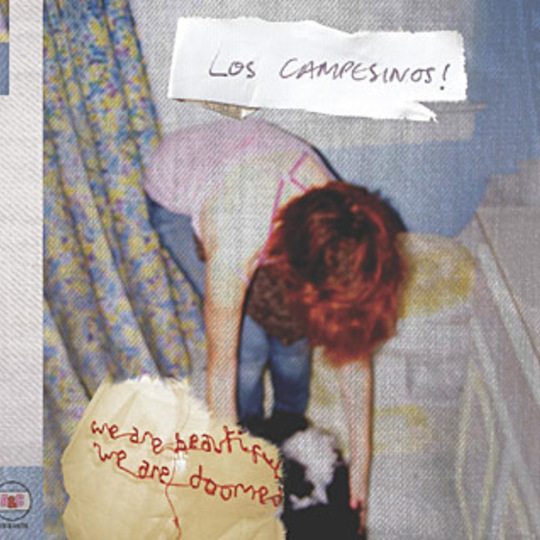 A mere five months on and we've got album number two from Cardiff's Los Campesinos! in our hands and ears. But We Are Beautiful... isn't regurgitated remains, studio-floor leftovers or a swerve in a different direction - instead, it's the sound of a band with a shedload of energy and ideas getting that vital, cathartic release before fatigue sets in.

And whereas many bands are chastised for repetition, you can't ever imagine wanting Los Campesinos! to veer away from their particular sonic furrow. So while it _is_ more of the same, when that same is such an unpretentious joy to listen to it's churlish to complain. That's not to say it's perfect though: one or two tracks are slightly stretched beyond their natural life, and 'Between An Erupting Earth And An Exploding Sky' seems like 76 seconds of swirly sounds to bump the record up to ten tracks. But these are minor quibbles.

We Are Beautiful... certainly hits the ground running - sprinting, actually, at an Olympic pace with 'Ways To Make It Through The Wall'. Here, lyrics such as "I think it's fair to say that I chose hopelessness / And inflicted it on the rest of us / But at least I've come to terms with my mortality" revisit the familiar themes of youth and youthful despondency of the first album, and this continues in 'Miserabilia': "Shout at the world because the world doesn't love you / Love yourself because you know that you'll have to".

Those still bewitched by 'You! Me! Dancing!' will fall head over heels for the title track, despite it sulking in the corner like a jilted sister. And in "Absence makes the heart grow fonder / Fondness makes the absence longer" and "You said he had his teeth fixed / I'm gonna break them", it contains two of the best couplets you'll hear this year. And there's also a wonderful terrace chant, making fine use of the 'F' word.

So where does that leave us? Well, whack both LC! albums together and, though you've got barely an hour of music, it's still a better hour than most bands manage during the first couple of years of their existence. Give them another six months in the studio and they'll probably come up with the ultimate indie-pop song to conquer the world's dancefloors - but, for now, this is certainly more than acceptable.