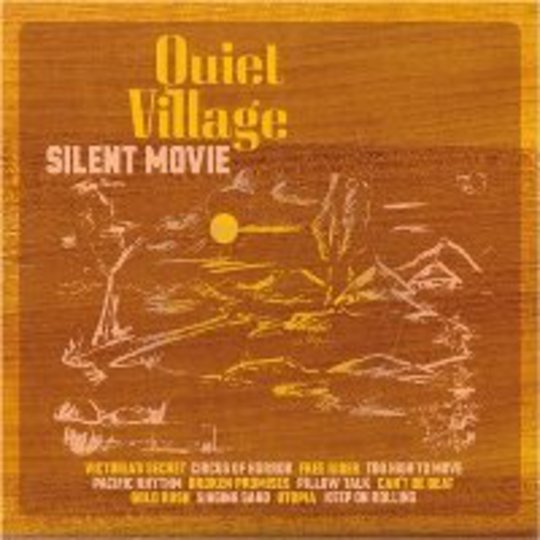 With a name lifted from releases by ‘50s exotica icons Martin Denny and Les Baxter, it should come with no surprise that Quiet Village pick at the same strands of Balearic beats that laid the groundwork for the slew of moping easy listening lounge records that thrived in the ‘90s (St Germain, anyone?). Picking through the record box Joel Martin and slow-burning house auteur Matt Edwards have recently been paraded around as something of a glorious spectacle, with Silent Movie an apparent idyll packed with crate-sift samples. After finally getting hold of a copy it turns out any vintage picks are eclipsed by the sheer numbing tedium of it all.

Dubbed as “sophisticated exotica for adults” the record smears acid-rock hooks across boutique beats. But rather than anything deeply entrenched in rich David Axelrod sounds opener ‘Victoria’s Secret’ makes more like the theme for _Last Of The Summer Wine reworked for an Algarve special than any unearthed treasure sticking out of the sand. With the soft prog-rock epilogues of ‘Broken Promises’ and _‘Pillow Talk’ sweeping in with darling dinner party grace, it’s the sort of record that fits in as some pedestrian after-club comedown album to listen to as you grind your teeth away to in the early hours ‘cause you can’t bear the silence.

Part of the dreariness is in its calculation. As it shifts through guises it’s as if it were made with the aspiration of a WIRE cover feature lodged in the back of the mind, with ‘Too High To Move’ a particularly audacious attempt to genre-cram. Released on the erratic !K7 this all seems so anaemic and backwards when compared to the way exotica was harnessed by El Guincho for his intoxicating tropicália-dub hubbub Alegranza, or White Rainbow’s worldly Prism Of Eternal Now. Though with a different set in mind, when put up against these dynamic displays Silent Movie is something of a limp affair, with the percussion often resembling no more than an arthritic hand shaking a maraca after too much shisha at some café off of Leicester Square.

Unlike the world of exotica Denny laid down, fulfilling the ‘background’ duty he saw it as satisfying, it was also intensely broad music - ‘Pacific Ocean’ just sounds like Caribbean cruise ship schmaltz that’d perhaps find a home if there’s room besides your Morcheeba and Jamiroquai records. With Silent Movie there’s a cold approach that leaves it just seeming clinical and ersatz; flat and pasted out like some cheap meat. Ultimately, it’s the ubiquity of it all that’s its downfall.