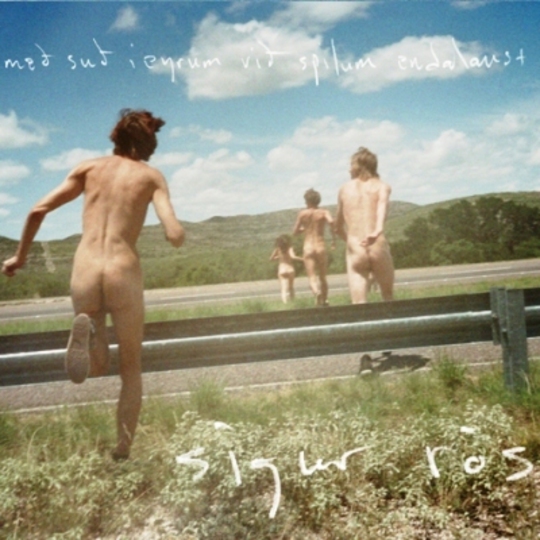 As their commercial star’s ascended, Icelandic quartet Sigur Rós’ critical stock appears to have fallen. Six years after their breakthrough (second) LP Ágætis byrjun wowed the music press in ’99, last album proper Takk… established the outfit as soundtrackers supreme, their songs beamed into the homes of millions nationwide on a weekly, if not daily, basis. Yet despite this increased profile, the album received a spread of lukewarm reviews, and its stopgap ‘follow-up’ Hvarf-Heim fared worse still, DiS seeing fit to only award it a 4/10 score.

Put simply, as Sigur Rós reached a wider audience, their original supporters were left feeling that the band wasn’t challenging itself especially. Takk… contained its fair share of blissfully ethereal moments, exploited superbly by the BBC, but it lacked the heart of 2002’s ( ), the last Sigur Rós album to attract as good as unanimous praise (DiS review here), that special something that had set this band out from the post-rock pack when ‘Svefn-g-englar’ enraptured so many teary admirers at the fading of the last millennium. Things have to have changed on their fifth LP, the mouthful-of-a-title Með suð í eyrum við spilum endalaust.

The album’s title translates as ‘with a buzz in our ears we play endlessly’: it’s not the most promising of introductions to a record that you hope won’t find its makers simply going about their business with nary a care for development; you want clear beginnings and endings, an experience that can be broken down into movements to cherish. Yet opener (and lead single) ‘Gobbledigook’ sets the pulse racing in a most unexpected fashion, coming on like Sigur Rós have been taking tips from Animal Collective. The percussion is pounding, that aching drone we’ve come to associate with the band absolutely absent. This is immediate, strikingly so; it’s a blindsiding move. And it’s all over only three minutes after it begins. It’s as far away from any ‘signature’ Sigur Rós sound as they could have strode without calling in Pendulum to collaborate on some rave beats.

A breezy, bustling beginning is successfully followed by the equally absorbing – for reasons you were never anticipating – ‘Inní mér syngur vitleysingur’, another song that’s speedy of pace, and really quite indie-pop of structure; it’s something that you could easily imagine an act like The Ruby Suns piecing together, mixing a slight otherworldliness with obvious motifs and memorable hooks. ‘Gooan daginn’ slows the pace at three of eleven, but still we’re in unexpected territories, listening to a band deliberately operating outside of their most comfortable zone, at least for a while.

It can’t last, but when Með suð í eyrum við spilum endalaust takes its eventual turn for the more traditional waters the band has sailed previously, it does so with grace; there’s no immediate 180, but rather a glide into sensuous tonal soundscapes. ‘Festival’ is gloriously seeped in melancholy, lingering sighs of guitar rising and falling beneath vocalist Jón Thor Birgisson’s alien-yet-affecting wails; somebody might have called this ‘whale music’ once, and when the singer’s on form like this it’s easy to understand why. While Icelandic dominates, for the first time Sigur Rós have penned a song in English, the closing ‘All Alright’. Its distant horns play engage in a slow dance as a high-mixed piano leaves breadcrumb trails for the listener to follow through the encroaching darkness. It’s not threatening, this pressing black; rather, it’s a lights-out to look forward to, to drift into without a care left in the world. This is the feeling that the last album failed to convey fully. To hear it again is a joy.

The middle section of Með suð í eyrum við spilum endalaust is where its longest tracks are to be found, and as such attentions can wander; after the comparative assault of the album’s opening brace, offerings like the tender ‘Ára Bátar’ seem rather without purpose. It’s one of a handful of songs that meander, quite delightfully, without any real urgency or direction, content to just be_ for the duration. In the right environment these will prove to be album highlights, but under the critical spotlight they’re a little too reliant on past glories to fully connect with tastes altered by the band’s adventures into risk-taking new territories. But do not mistake the above words to mean there’s filler of note to be found here – the only track that could be trimmed, if you really wanted to get those knives out, is a pleasantly forgettable instrumental buzz titled ‘Straumnes’, the album’s penultimate piece. Its inclusion isn’t puzzling as such – it _is gorgeous – but it does rather lessen the impact of what would have otherwise been a tidy ten tracks of well-executed vocal-led performances from a band upping their ante at just the right time.

At the perfect time, actually: journalists are sure to find this fifth album a lot more conducive to critique-penning given its presentation of new ideas and potential directions for album six, and with festival season in their sights Sigur Rós have collected together a number of tracks that will be as happily at home experienced under burningly bright sunshine as they will the twinkle of a million distant stars. Once, this band were making music to stare skywards to, to contemplate the vastness of the universe we’re such a tiny part of; now they’ve discovered a hidden reserve of human spirit, sucked it in and produced a record that will reconnect their wealth of talents to listeners fearing they’d forgotten how they’d ever reached such a lofty pedestal. It’s great to have them back.

We're Becoming Islands One By One