We're Becoming Islands One By One 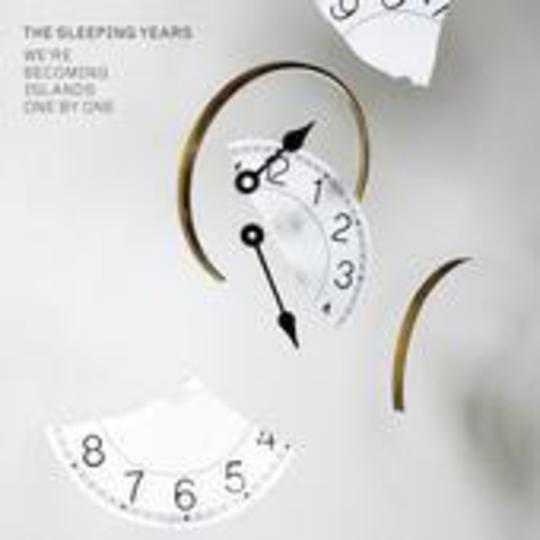 When Dale Grundle, aka The Sleeping Years, sings about his hometown and all the magic and misery that surrounds it, he isn't merely following the folk trail most recently taken by Justin Vernon. Rather, Grundle seems quite unique in the plaintive way he can turn simple observations such as the gentle strum of 'Dressed For Rain' into fascinating tales detailing the struggle and depravation he quite possibly endured in the sleepy Northern Ireland town of Coleraine, from where he originates.

For Grundle, it’s been anything but an easy ride to where he finds himself today. His first band Catchers were part of the post-Britpop rush that saw pretty much anything with a Beatles riff and bowl haircut signed amid the mid-‘90s flirtation with R‘n’R hedonism - not that his band particularly fitted; it was more a case of right place, right time. After Catchers drew to a halt, Grundle found himself more at ease writing alone, with nothing more than an acoustic guitar, yet it wasn't until French record label Talitres started to take an interest that the undoubted potential of The Sleeping Years gained fruition.

Having released three completely sold-out EPs last year Grundle, with the help of classically-trained cellist Michelle So, one-time Rothko drummer Tom Page and esteemed engineer-cum-producer Ian Dowling (credits include Daniel Bedingfield, Soulwax and The Kooks), decided the time was right to finally construct an album. Almost a year later, We're Becoming Islands One By One is ready to go.

With the opening acoustic clamour of 'Setting Fire To Sleepy Towns', Grundle sets a scene not too dissimilar to Bright Eyes' 'The Center Of The World', albeit in a more minimalist fashion. Elsewhere, comparisons to both Nick Drake and the whimsical musings of Tim Buckley are unavoidable, particularly on 'The Lockkeeper's Cottage' and 'Broken Homes', but don't be fooled that The Sleeping Years is just another pseudonym for aping greatness from years gone by. What Grundle possesses is an ability to make the most insidious turn of phrase ('The Shape Of Things To Come') seem like a life-affirming exercise in existence and acceptance ("communication and sounds, all jostling for a friend,"_ he opines) while the closing 'Islands' actually feels like it was written as some kind of farewell, a line in the sand as it were, towards his next venture.

With We're Becoming Islands One By One, Dale Grundle has created a record full of simplistic yet timeless melodies that only Bon Iver's For Emma, Forever Ago has really rivalled in recent months. That album was a ridiculously ignored gem that spent far too long bubbling under the surface before people finally pricked their ears up and afforded it some attention. Don't make the same mistake twice: We're Becoming Islands One By One could be remembered as one of 2008's best of its kind in years to come.