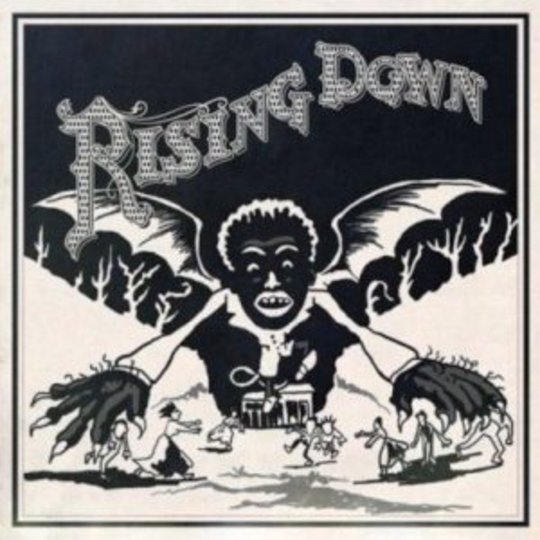 It steals away your breath, entirely unexpectedly: after so many records of engrossing beats and socially conscious rhymes, Philly hip-hop collective The Roots are getting angry.

Rising Down was making waves ahead of release, word rumbling upwards that alterations were being made to its tracklisting, collaborations with emo superstars trimmed from the end product as tones upbeat didn’t sit pretty with what preceded them. ‘Birthday Girl’, featuring Fall Out Boy’s Patrick Stump, does ultimately appear, but it’s positioned at the rear, an afterthought in the band’s mind shackled in place by their paymasters. It’s easy, immediately, to hear why: a summery song about girls doesn’t truly fit in with tracks directing sights at the internet’s decaying of the music industry, the declining state of the environment, and the ills that loiter about us without anyone doing the slightest fuck all about them.

The first track proper, the title track, sets our tone: dark, menacing, heavy of low end and vicious of rhyme. Conflict diamonds, tax rises, natural disasters, slavery, downloading – “Does a computer chip have an astrology, and when it fucks up does it give you an apology?” – and more… it’s a dizzying blitz of imagery, set to a bombastic pulse that gets the digits tapping straight away. The aural malevolence manifests again in ‘Get Busy’, where black market firearms rip apart neighbourhoods. And where are these neighbourhoods? “Southside, northside, westside, worldwide.” The Roots are addressing concerns on a global scale, looking beyond their immediate surroundings to tell us – you, me – that these things are happening. And they’re closer than you might think.

Again the internet is up for attack: “Fuck the internet”, three simple words that skip straight to the point. But this isn’t an album made by nostalgia-loving sorts for similarly minded consumers who think iTunes is something you get from a newsagents when you’ve a cold. It’s aware of actions and reactions of a very contemporary nature, observations astute and topical. As America rolls towards a new dawn, a dynasty rightly prevented from laying root, changes will only be made after mistakes are rectified. Rising Down’s title almost seems to mirror this: upward movement must be balanced by retrospective recognition of what went wrong to necessitate change in the first place.

Black Thought’s tirade of ‘75 Bars’ exhilarates, with a ‘nigger’ count that’d make Nas blush. It’s purposely aggressive of both language and delivery; it’s meant to sound violent, without ever advocating any physical altercations. It has the hairs standing to attention from its first four bars. ‘Criminal’ focuses on matters closer to home – small-time theft, gambling, and ultimate comeuppance as our protagonist is led away in handcuffs. Guest emcee Saigon adds colour to Black Thought’s outlines, and the track’s a smooth-of-beat, atmosphere-rich offering that presents the facts as they are: if you fuck up, you will get fucked up. Best not to put yourself in a compromising position in the first place.

‘I Will Not Apologize’, placed in the middle of its parent LP, seems to lay the law down on perceptions of the album: “Some won’t get it, and for that I won’t apologise”. Here, the record’s pace is deliberately slowed, lyrics dripped rather than sprayed; emcees trickle out their words as the beat ticks with a delay. It’s a break that can’t last, as ‘I Can’t Help It’ drops the listener back into Rising Down’s mixer once again, twisting vocabulary to fit vicious beats seeping dread. The Common-featuring ‘The Show’ buzzes like a wasp in the ear, venomous and about ready to snap through frustration, and by the time that shoehorned-in Stump number makes itself heard, it’s as if a completely different band has hijacked this album. Really, it couldn’t have just been dropped?

It matters little – ‘Birthday Girl’ can’t affect the coherence, the assault, of this album from where it sits. Rising Down is an attention-holding, cacophonous of intent record that realises its blueprints spectacularly well. The few duds in the pack barely register, certainly not in a negative way, ensuring that aforementioned LP highlights continue to bore into the listener after the record’s put to bed. It gets nudged out by the next release but soon springs back, every bit as potent of message, of something must change voice, as it was the first time through.

It might not be their best-ever album – Phrenology can still claim that title – but Rising Down finds The Roots reinvigorated, more passionate than ever. If relative veterans can continue to deliver the goods in such spectacular fashion, then rap music’s clearly in very good health.