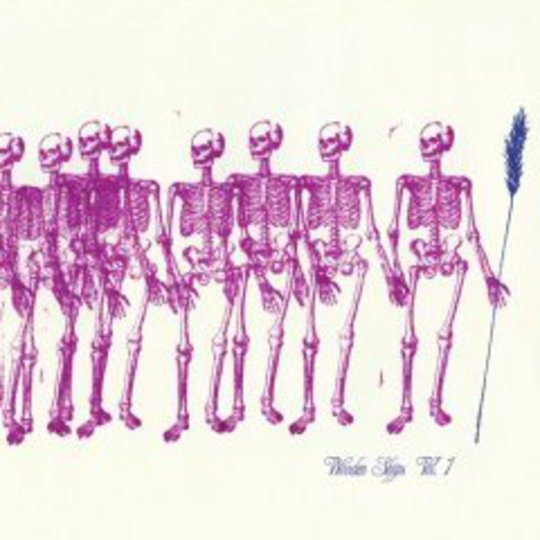 Catching Wooden Shjips for the first time live last month on a hot and steamy Monday night in London was a revelation for this wee garage fan. Footing the bill below Howlin' Rain and Meat Puppets at London's Scala, the band played to a large early-doors crowd of what can only be described as 'Heads'! It was a beautiful show, a monochromatic fuzzed-up throbbing minimalist romp through the band’s small but impressive back catalogue. Tight, motorik drums from Omar Ahsanuddin slots into lolling, repetitive bass lines from Dusty Jermier. Heavily treated Casio organ from Nash Whalen pulsates whilst Erik ‘Ripley’ Johnson spews effects laden fuzz-guitar all over the top. Nice!

This singles compilation collects unfeasibly hard to track down vinyl releases such as the Shrinking Moon For You 10" issued on their own self-titled label, plus two 7"s cut for the Sick Thirst imprint. Hats off to those lovely people at Holy Mountain for collating these gems, as what a joy this album is.

Wooden Shjips buck the trend of your typical West Coast psych band, holding seemingly little truck with the Californian sun-drenched blessed-out stylings of their historical predecessors, or indeed modern garage contemporaries (hello Warlocks, Modey Lemon, Brian Jonestown Massacre et al). This, on the surface, is a far more measured and serious musical take on a classic sound that doesn’t resort to any lame clichéd fucked-up-ness so prevalent amongst their peers. Wooden Shjips reference everything from serious heavy duty late 20th Century composers such as Terry Riley to the primal rock therapy of everything from the late lamented Bo Diddley to one-note synth abusers Suicide. This feels much more like a darker, East Coast take on rock’s hypnotic gravitational pull.

‘Shrinking Moon For You’, their first single, is a three-note, eight-and-a-half-minute synth, guitar, drums and tambourine charge. Squealing feedback and waves and waves of deep reverb guitar skree freely, while heavily echoed vocals abound on this shamelessly lo-fi blast of lysergic energy. As a debut release it's an absolute classic statement of intent that has paved the way to their fantastic debut album release proper (review). Oh how I wish I could track a copy of this down on 7". ‘Death’s Not Your Friend’ is another stab at syncopated distorted organ, whilst ‘Space Clothes’ sounds like found-sound field recordings from a bygone age, a pulsating crackle of radio waves and half-heard snippets of conversation – genuinely odd and unsettling. ‘Clouds Over Earthquake’ takes Velvets-like guitar assault and maraca abuse to a new level. Astonishing stuff.

‘Dance, California’ is perhaps closest to the late lamented UK band Loop. What sets Wooden Shjips apart is the isolation in which they seemed to have brewed up this sonic gumbo having seemingly never stumbled across the work of the much loved Croydon four-piece or other likeminded UK bands of the mid to late 1980s. I'm thinking of long-lost stargazers such as Perfect Disaster, Sun Dial and, of course, Spacemen 3.

Wooden Shjips return in July to blow more minds at the Supersonic Festival in Birmingham and London’s Cargo, amongst other shows. I'll be front and centre.

Video: ‘Dance, California’
Log-in to rate this record out of 10
Share on
Love DiS? Become a Patron of the site here »