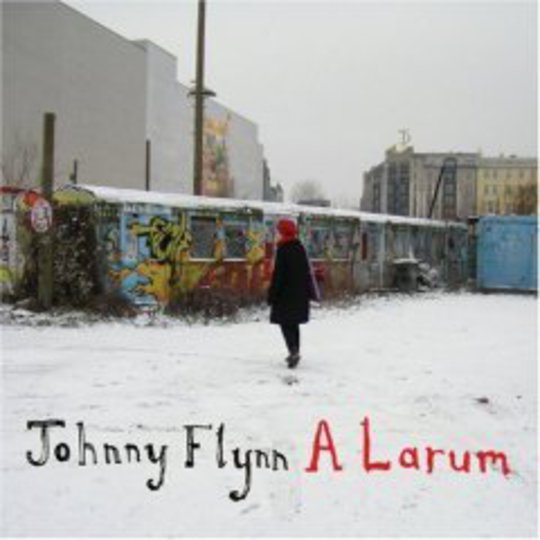 Where suburbia meets the sky and the underground becomes overground, the ends of Tube lines are magical places. In the last year numerous kids from way out West have wandered East: Laura Marling, Noah & the Whale, Jay Jay Pistolet, and (perhaps the best of these) Mumford & Sons, but these anti-folkers tend not to edge beyond the topics of being young and being lost. The most mature offerings are a result of Johnny Flynn’s wistful way with melancholy and melody.

What makes Flynn different is his breadth of influences and his brevity of emotion. Drawing equally from Americana and British folk, Flynn offers a modern reappraisal of the genre, avoiding the pock-holed clichés that the kid-with-guitar everyman is all too keen to flaunt. As a result A Larum walks a thin line between pretence and restraint; both pastoral and gritty, it is as much Nick Drake as it is Leadbelly.

Much of this duplicity is actually a result of his attempts to carve out a muse of his own. Having attended the same drama school as Amy Winehouse and The Kooks’ Luke Pritchard and toured the world with a Shakespeare company, it is presumably safe to assume that when he sings of poverty and desperation it’s not really coming from experience; it only takes a minute of opener ‘The Box’, for example, before talk turns to “eating from bins in parks” and sleeping betwixt cardboard. But whilst sea shanties are always gonna ring hollow from landlocked lungs they can, at the very least, bring the sniff of salt. This impersonation, or at least juvenile reproduction, doesn’t as much discredit Flynn as merely highlight what he does best. A Larum is, for the best part, narrative-driven melodic folk done near-perfectly.

The songs themselves rely on the strength of Flynn’s words more than they do the simple arrangements. Although his voice is too harsh to carry much of a melody and verbs sometimes flow too freely where silence would suffice, his paced hush is enough to string a certain melody to the narrative, to add beauty to the beat. ‘Eyeless in Holloway’ is the standout track, as gleefully triumphant over small victories as it is mournful for their loss. The charm on which Flynn relies does drag with time, tracks such as ‘Wayne Rooney’ and ‘Tunnels’ are more a reproduction of previous highs than a reinforcement, but with many a morning ahead of him it would be foolish to dwell.

Johnny Flynn: a talent that can only roll on with the years.