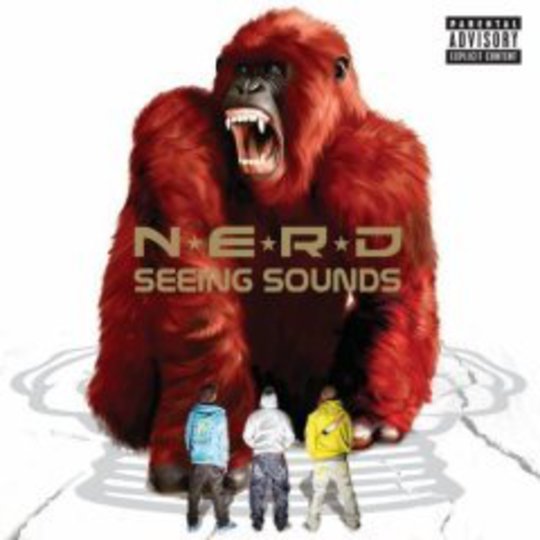 What critics mean when they say things like “no one has yet successfully fused the best points of rock and rap” is actually “I wish a polite rock band would make the misogynist parts of rap that I find so distasteful more palatable so that I can enjoy Big Pun without a frisson of guilt”. I know this is true because LOADS of people have fused elements of rock with hip-hop or vice versa and made excellent music in the process.

Have you heard ‘Gratitude’ by Beastie Boys? Run DMC’s slightly famous collaboration with Aerosmith? What about The Dø, Why?, ‘Black Steel’ by Tricky, that Beck dude, Kanye West’s work with Jon Brion, Gorillaz, Hot Shots II by The Beta Band, The Young Gods, The Chemical Brothers, that Teenage Fanclub tune with De La Soul, Dismemberment Plan, the Q-Tip album that never saw the light of day, practically everything Danger Mouse touches, Linkin Park and Jay-Z? All have successfully fused aspects of hip-hop and rock. Half Eminem’s best moments are built on rock beats and guitars. ‘Bittersweet Symphony’ by The Verve, one of the most recognisable and successful rock singles of the last fifteen years, is built around a string sample and a drum loop.

Hell, NER*D’s own first album did it pretty damn well, at least by the second time they released it, partially re-recorded and comprehensively remixed so it was played on live instruments (albeit heavily sequenced and overdubbed) rather than on synthesizers and drum machines.

At that point, in 2001/02, The Neptunes were only on the verge of becoming the culture-striding colossuses we knew them as a year later; their sound may have been everywhere, but Pharrell Williams’ face wasn’t. As such the sex and drugs narratives portrayed throughout In Search Of… could be taken with a pinch of salt, as either amusingly projected braggadocio or even, if your glasses were rosy enough, cautionary moral tales. Six years later, with Pharrell’s visage omnipresent and in a certain light very obviously full of both cocaine and botox, NER*D’s star seems to have waned a little. If there was a jump-the-shark moment it was probably the all-too-literal video for ‘She Wants To Move’ from sophomore album Fly Or Die; no one needs to see the lyric “her ass is a spaceship I want to ride” brought to life.

But still, Williams and Chad Hugo have had their finger on the pulse of pop culture for a decade now (even if their ne’er-do-well mate Shay hasn’t, quite), and while they may have been a little off the pace lately, a new NER*D album is surely a big deal. Isn’t it?

Things start off well enough with the double-jerk pulse of ‘Time For Some Action’ and the charmingly frenetic coke-rap of early single ‘Everyone Nose’. The choppy guitar groove and call-and-response vocals of ‘Windows’ are pretty delicious, too.

But then the casually misogynistic backing vocals of ‘Anti-Matter’ inspire a conflicted internal dialogue; on one had I think “it’s 2008; nothing is offensive anymore”, on the other, “it’s 2008; I can’t be bothered with this anymore”. This internal moral conflict is nowhere near resolution before the climactic backing vocals burst into life: “you jump around like you A-D-H-D / A-D-H-D / A-D-H-D / you jump around like you A-D-H-D”_. The problem is that I don’t know if this is genius or idiocy anymore.

The next song features fractious, million-mile-an-hour drum ‘n’ bass percussion, and the lyric “spaz if you want to”. It is called ‘Spaz’. I can only assume hope the word has different connotations in the States to what it does over here. The opening line? “I’m a little teapot / short and stout”. Mental illness; the last taboo of piss-taking in pop? Not anymore.

‘Yeah You’ is NER*D’s much talked about take on the ‘You’re So Vain’ trope as perfected by Carly Simon. Sweetly ironic to hear Pharrell “my face on your sneakers” Williams singing about an egotist? Perhaps. Either way, it’s a decent tune, but pales in comparison to the delicate, almost Beatles-esque opening melody of ‘Sooner Or Later’, which is absolutely nothing but lovely. Thankfully the emotionally distressed chorus that follows doesn’t let it down; whether the extended yacht-rock guitar solo outro does or not is up to you, but it squeals and widdles like only the best cock-rock can.

Meanwhile ‘Happy’ could be, and has been, interpreted as NER*D’s twisted understanding of shoegazing, all shimmering guitars, stereo-effects and chugging rhythms, while the breathy intro and microscopic percussion of ‘Kill Joy’ is vintage Neptunes, but the tune never really takes off despite its best efforts.

And that’s the problem here; while Seeing Sounds is a marginal improvement on NERD’s second album, and a massive leap forward from Pharrell’s damp-squib of a solo record, it doesn’t quite reach the heights of (either version of) their debut, let alone the pick of Pharrell and Chad’s production work for other people. The reason is that what NERD, and to an extent The Neptunes themselves, do is now so familiar that it almost seems a little passé in 2008. Crunchy, eclectic, hip-hop and rock melding post-millennial pop just doesn’t sound like the future anymore.