These Are Our Hands 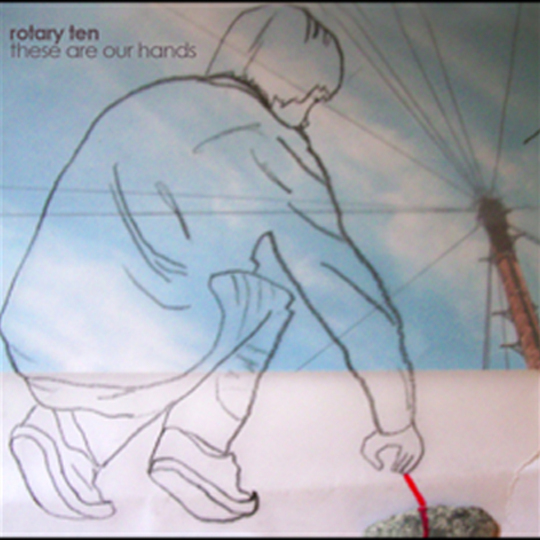 For a band firmly ensconced in Sheffield city life, there's something distinctly rural sounding about Rotary Ten. One delve into their history and all is revealed; their roots lie in the totally un-rock and roll hotspot of Lincoln.

Hailing from a part of the country with absolutely no musical heritage whatsoever to speak of, it is perhaps not surprising that Rotary Ten upped sticks and moved to somewhere more vibrant and infinitely more in tune with what they wanted to be. Although the choice of Sheffield was made easier by the fact two of the band ended up at one of the city's universities, their honest and altogether wholesome sound would at least be able to prosper in a place where the spectre of Arctic Monkeys can still be heard in many a practise room.

That Rotary Ten sound an absolute million miles away from anything of the sort should be seen as a compliment, and is undoubtedly one of the reasons why London based indie Xtra Mile Recordings took a gamble in signing the band to their roster at the back end of last year.

Not that it has all been plain sailing. For a band who've been together for the best part of five years, honing their sound has proved challenging to say the least, but worthwhile if their debut album These Are Our Hands is anything to go by. The band is based around the Trafford brothers, Stephen (guitar) and James, whose distinctive vocal and additional guitar contributions are what give Rotary Ten that unique appeal when all's said and done.

Although trading influences from both sides of the Atlantic - Panic At The Disco and long-lost ‘80s Liverpool duo The Lotus Eaters immediately spring to mind - there's no doubt Rotary Ten have been through the back pages of their adopted home's musical ancestry too. The raucous 'I Fear The Field' appears to be about being back at school during PE when the worst player always ended up between the posts, hence James Trafford's disheartening cry of "I am in goal forever". After a while, though, a realisation kicks in that its only a game after all: "We are all men" he declares over chiming guitars, with Sir Jarvis of Cocker no doubt nodding his head in approval on the touchline.

Recent single 'Time Is Not A Line And I Am Not A Rock', where an obvious love of classic Britpop welds itself with the more obtuse song structures of someone like Youthmovies or fellow Yorkshire dwellers Grammatics, is a song that veers off in many directions, every one more unexpected than the last. At times heartily reminiscent of the vastly underrated Komakino, whereas at others their celebratory good-natured jingles of all things quintessentially (middle) English epitomise another great lost band of the past few years, Bristol's New Rhodes, Rotary Ten are an appealingly mixed bag. 'These Men Are Made Of Rust_ ("...they will turn you into dust") and 'Action Man', with its wry glance at a wasted education, both sound like 21st Century anti-headmaster rituals. Then there's the jumpy dissonance of penultimate track 'Strategy', which creates a whole new persona for song and band entirely.

I could go on about each and every one of the eleven songs here but I won't spoil the fun. The only downside with this record is that beneath the bravado and Marr-approved chord changes, one suspects there may be a distinct lack of ambition to ever leave the indie ghetto. Let's hope not, as Rotary Ten are clearly a talented bunch with a lot more to offer, and These Are Our Hands is one of the perkiest debuts to land in 2008 so far.

Where The Light Gets In

I Am Kloot Play Moolah Rouge